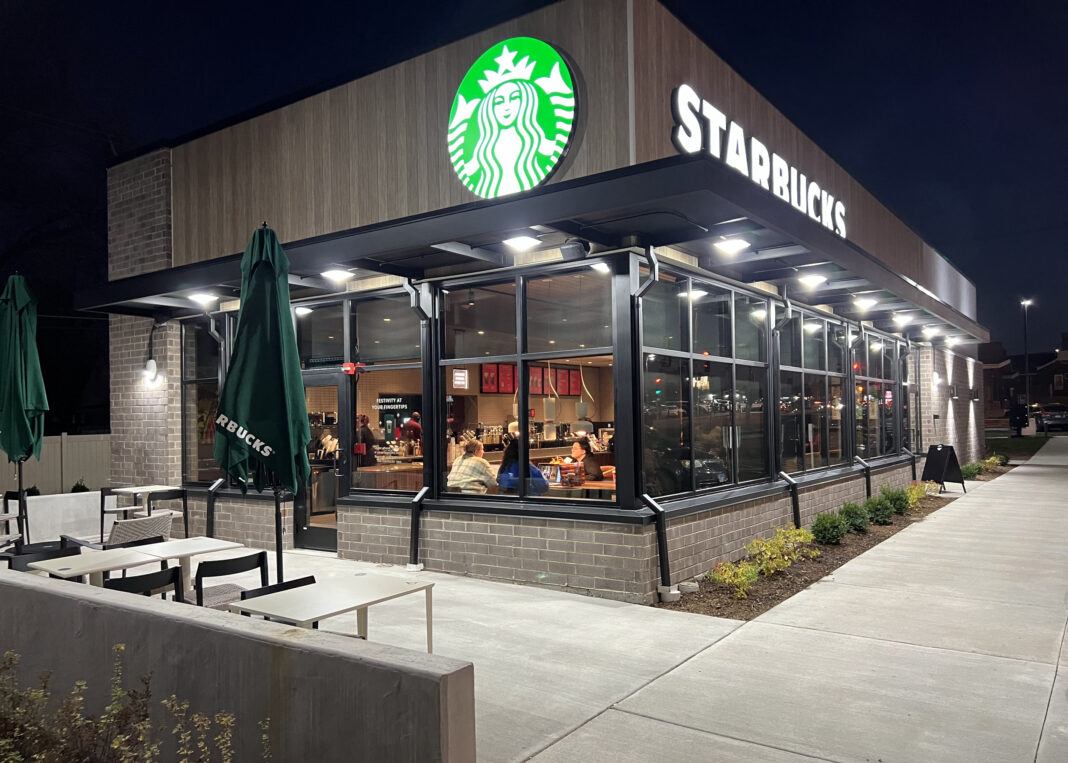 LANSING, Ill. (November 11, 2022) – At noon on Friday, Lansing’s new Starbucks opened its doors for the first time to serve up coffee, treats, and a fresh, modern building to the Lansing public.

Ending a process that was officially started in late 2020, the completion of the coffee giant’s Lansing location comes a year after it was initially estimated, a result of numerous delays.

Lansing’s Starbucks is located on the northeast corner of Torrence Avenue and Thornton Lansing Road, and has entrances on both streets, as well as a drive-thru. The interior of the building has a modern design, and includes roughly a dozen tables of various sizes.

“We’re so excited,” said Molly Miller, Manager of the Lansing Starbucks, “So many people fought for this store.”

Miller explained that Jill Allen, who passed away in December of 2021, was a Lansing resident who served as a regional director for Starbucks and was excited to bring a location to Lansing.

“Jill Allen, before she passed, really fought for this store,” Miller said, adding that a memorial plaque for Allen is likely coming soon.

Miller said much of the Starbucks staff lives in Lansing, and all of the baristas trained at neighboring Starbucks locations in the weeks leading up to Lansing’s opening.

“We love to supply jobs. We love to hang out. The more the merrier,” Miller said.

The Lansing Starbucks is open in time for the holiday season, when Starbucks features its festive drinks and treats, such as the Peppermint Mocha, Caramel Brulée Latte, Toasted White Chocolate Mocha, and — Miller’s favorite — the Chestnut Praline Latte.

Although a date for a grand opening and ribbon cutting has not yet been set, Miller said the store will be hosting a promotion on Thursday, November 17 when 400 red reusable Starbucks cups will be given away while supplies last.

The construction of the project was overseen by Glazier Corporation, a development company that is also planning to bring a Taco Bell to the lot immediately north of Starbucks, and a Chipotle immediately west, across Torrence Avenue.

“Starbucks is one of those retailers that, when they set up shop in a community, it becomes an easier sell to other retailers to come next to it,” said Dan Podgorski, Lansing’s Village Administrator.

What’s going on with One Trick Pony, Golden Palace, Jack’s, KYNGZ, and other projects