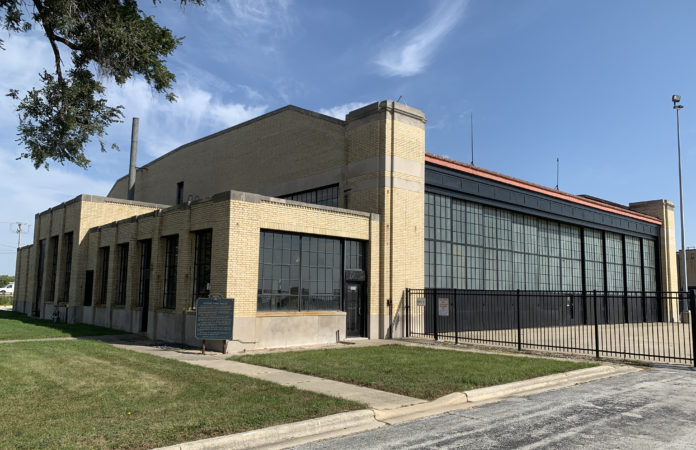 Long restoration ahead for 94-year-old building after federal release

LANSING, Ill. (October 15, 2020) – When his airplane hangar was completed in 1926, Henry Ford probably never imagined a wedding reception or concert taking place in his state-of-the-art facility designed to display Ford Trimotor airplanes. Over 90 years later, that’s one way the Village of Lansing wants to use it.

As the Village emerges from a long process of working with different agencies that have a stake in the Ford Hangar, the path is clearer than ever before for the Village to adapt and rehabilitate the historic building into a space that’s more public-friendly. This includes restorations to allow the hangar to be used as both an event venue and a transportation museum.

According to the Lansing Municipal Airport’s website, Henry Ford built the Ford Hangar to “connect his Ford Motor Company manufacturing plants in southland Chicago with his factories in Detroit and to produce and display Ford Trimotor airplanes.” The brick and limestone structure, which is on the southeast corner of the Glenwood Lansing Road and Burnham Avenue intersection, was designed by renowned architect Albert Kahn. Kahn’s design was remarkable in its time, as he placed an emphasis on natural light, built a structure that did not need internal columns to support itself, and installed hangar doors that could be opened and closed by just one person.

Charles Lindbergh and other notable aviation figures visited the hangar throughout its years. The Village of Lansing acquired the hangar and the airport in 1976, and it was placed on the National Register of Historic Places in 1985. The structure served as an operational hangar until 2011, when it was vacated in the name of preservation.

The process: a Ford Hangar fly-over

The hangar’s identity as both a historical building and an aviation-related structure has made maintaining the nearly century-old building difficult. With regulations to navigate from the Federal Aviation Administration (FAA) and the Illinois Department of Transportation (IDOT) regarding the hangar’s use and funding, as well as considerations regarding the National Historic Preservation Act, the Village of Lansing has largely had its hands tied when it comes to the Ford Hangar.

For an event like the Fetching Market, for example, which last occurred in 2019, the Village of Lansing had to prove that the Fetching Market was paying to use the space at a “market rate,” meaning no special discounts were being provided. DeLaurentiis said the Village also had to prove “that we gave anyone else who wanted to have a competing operation an opportunity to compete.” These stipulations were difficult to prove, given the uniqueness of the Fetching Market, DeLaurentiis instead argued the event was a “public good,” which passed muster at the federal level.

With the Ford Hangar set to be released from federal grant assurances, and the Village of Lansing entering into a Historic Preservation Covenant with the FAA, the Village will no longer have to jump through hoops to use the hangar for events like the Fetching Market, and will have a level of control over their use of the hangar that they have not had before.

According to DeLaurentiis, the Historic Preservation Covenant serves to assure federal powers that the Village of Lansing will not “visibly alter the historic character of the original design.” This means as the Village does work on the Ford Hangar to bring the building into compliance with modern standards (fire codes, ventilation standards, Americans with Disabilities Act compliance, etc.), it must do so in a way that does not significantly harm the historical aspects of the hangar.

“We finally have a path for the Village of Lansing,” DeLaurentiis said, who has played a large role in freeing the Ford Hangar from federal restraints. Lansing first submitted its release request to the FAA in August of 2017.

The Village of Lansing hopes to turn the Ford Hangar into a transportation museum for the public as well as rent out the space for business and personal events, and use it for Village events.

During the September 1 Village Board Meeting, Village Administrator Dan Podgorski said the Village had developed a “destination-driver mentality over the last few years” when it comes the Ford Hangar. He mentioned that Fox Pointe is not able to hold events year-round due to weather, something the Ford Hangar would be able to do.

DeLaurentiis said once the building is renovated under the “adaptive reuse” guidelines stated in the Historic Preservation Covenant, the venue should be able to host at least 500 people for an event. He mentioned a twice-annual convention where airports from the midwest gather together. “They’ve never been able to meet here, but maybe once we get the building up and running in a good way we could have the convention here,” he said.

Podgorski said that, based on an architectural survey done on the hangar years ago, restoration costs would be “easily upwards of two to three million dollars.”

DeLaurentiis said grant money has already been secured to stabilize the hangar’s roof, and other grant opportunities would be pursued as part of the restoration process.

“There are so many different elements that you need to juggle and sort of coordinate,” he said, “so we have not sat down and laid out the new plan going forward. In other words, the 100% municipal plan—because we’ve always had to partner with FAA and IDOT for that building. As soon as the smoke clears … we will say ‘Ok, now how are we going to move forward on this thing?'”

“We want to be able to move forward, raise the funds necessary to restore it, and then get on with the business of hopefully turning it into an indoor venue that can benefit not only the airport but all of Lansing,” Podgorski said, “[It’s] something so unique that nobody else has. No other south suburban municipalities have an airport and they certainly don’t have a structure such as this.”