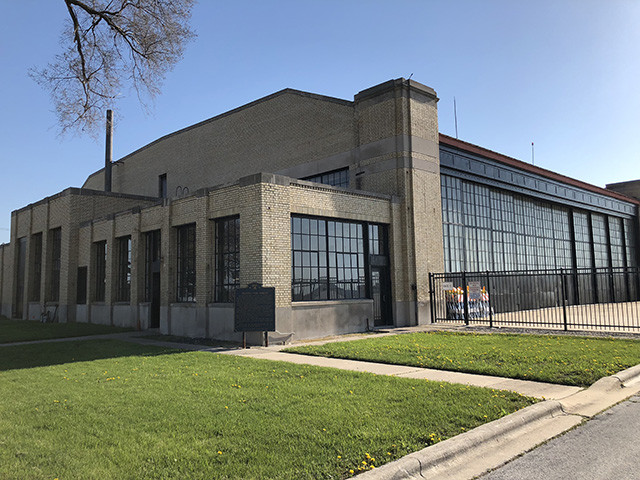 Architect members from ICAIA used “Principles of Livable Communities” to weigh criteria and make their selections. Those achieving Great Place status must be publicly accessible, pedestrian-friendly, designed on a human scale, and provide vibrant public spaces, among other requirements.

Architect Albert Khan designed the original hangar at Lansing Municipal Airport to connect Henry Ford’s Motor Company manufacturing plants in southland Chicago with his factories in Detroit, and to produce and display Ford Trimotor airplanes. Ford’s chief architect, Kahn included three new concepts in the hangar’s design: large sliding doors, expansive windows, and cantilevered construction. Kahn was also the first to include a passenger depot. The hangar stands exactly as it did in 1926, and its continuous use until 2011 is a testimonial to Kahn’s successful design innovations. Many early flyers used the Ford Airport, including Jimmy Doolittle, Billy Mitchell, Amelia Earhart, and Post & Gatty. Ford stopped making airplanes by July of 1932 due to the Great Depression. It was added to the National Register of Historic Places in 1985 and is undergoing historic preservation.

How were the Great Places selected?

An AIA Illinois Great Place had to meet several criteria:

The selection committee for the 200 Great Places project was created by the AIA chapters of Illinois, under the leadership of AIA Illinois. Each chapter nominated a core of places based on the population of their region. Each chapter developed its own nominating committee, and was encouraged to work with other local organizations. The total list was then developed to provide a range of place types, eras, and designers that represent a wide spectrum of Illinois.

What makes a “Great Place”?

The list of Illinois’ 200 Great Places was limited to the built environment rather than the natural environment to emphasize the creation by designers of all types. Examples of works by urban planners, landscape architects, urban designers, and local builders are included on the list. The list emphasizes the collective sense of place created in cities and towns as well as buildings designed by individual architects. The list spans the entire period of human settlement in Illinois, which gives a strong historical dimension to it; approximately half of the places have a historic designation and the other half date from the last 50 years.

“Separately and in total, our 200 Great Places are more than just examples of good or even great design—they are a testament to humanity’s need to shape their environment in a way that is often both pleasing and thought-provoking,” said Kim Kurtenbach, AIA architect with BLDD Architects and 2018 AIA Illinois Board President.

Lansing’s Ford Hangar will receive a plaque commemorating this recognition, and a special installation ceremony may be planned.

The Ford Hangar is located at 19507-39 Burnham Avenue in Lansing, Illinois.