LANSING, Ill. (September 30, 2019) – It’s one of Lansing’s most prized institutions. Easily accessible by road and sky, it’s been a familiar and intriguing part of Cook County since its conception in 1926 by American industrialist Henry Ford.

For people who aren’t pilots, interaction with the Lansing Municipal Airport is probably limited to an occasional visit to the Lansing Veterans Memorial (located at the far northwest corner of the property), or the window view when dining at Lynnie Ques Airport Bar and Grill. Others are familiar with the Historic Ford Hangar and various events held there. But a Google search reveals little public information about Lansing’s airport—how the Village acquired it, how it’s changed, what it’s like now, and what its future might hold.

When Henry Ford finished building his hangar in Lansing, he had dreams of promoting the novel concept of aviation to a nation still new to the idea. However, the Great Depression soon stifled Ford’s tri-motor plane manufacturing. The airport was eventually rented out to an aviator from Hammond, Indiana, and was called the Chicago-Hammond Airport until the Village of Lansing purchased it to secure federal funding in 1976. Since then, the airport has expanded and improved its facilities significantly and is now a prominent relief airport for this region of the United States.

Pilot Wayne Babiak from Crete, Ill., has been flying out of Lansing Municipal Airport since the 1970s. He’s among the ranks of thousands of other pilots—including Charles Lindbergh and Amelia Earhart—who have used the airport. Babiak started as a hobbyist taking flying lessons at the airport a year after Lansing acquired it and has seen plenty of changes since then.

“They’ve done a lot to the airport over the years with runway expansion,” Babiak said. “The 927 runway wasn’t as long as it is now, and the north-south runway used to be a grass runway until they paved it. I think even people in the past did a good job with maintaining the field, and the group out there now is doing a good job. …A lot of upgrades have been done over the years.”

A community feeling and local businesses

Babiak rents the planes he flies and belongs to a small local flying club called RPM. He said he prefers rentals because not only is it much cheaper than purchasing a $500,000 plane, but they’re well-maintained by the companies at Lansing Municipal Airport. In addition, he likes the community feeling of flying out of a smaller relief airport.

“We know who’s flying the planes,” Babiak said. “When you rent a plane from a big outfit, you don’t know who flew it last. Here, everybody in the club knows each other. It works out really well that way. And Kurt [Harmon]’s maintenance shop is right on the field.”

Harmon is an aviation mechanic who works for Windy City Aero, a company at the airport that provides aircraft repairs and upkeep. Babiak said that the company is a big draw for pilots flying into Lansing Municipal Airport.

“Not everybody can just work on an airplane,” Babiak explained. “It has to be someone who’s certified to do that type of work. …I think that’s a real plus for the field. A lot of people seek [Harmon] out from over here in Lansing and from other places.”

Windy City Aero and Harmon’s work aren’t the only draw, however. Three other businesses are onsite to attend to nearly every need a pilot or plane could have. Phillips 66 provides a self-service fuel island at the airport with competitive prices. Midwest Aerospace supplies aircraft parts to civilian and military plane operators at home and abroad. Finally, Midwest Business Center, the largest business at Lansing Municipal Airport, is the main provider of fixed-based operations for the airport. According to their website, they provide “aviation services such as fueling, hangar rental, ramp parking, as well as aircraft maintenance, flight training and flight tours all under one roof” to pilots and corporations seeking to do business at the airport.

A great location to serve the region

Babiak said he likes having an airport like Lansing’s to fly out of and hold club meetings at for many reasons. Whether you’re flying to Indianapolis for dinner or as far as South Carolina, as Babiak has done, he said it’s good to have a decent airport to come home to.

“The airport’s really accessible, and it’s well-maintained,” Babiak said. “I think the staff out there does a very good job at keeping the airport in good shape, and that’s important. It’s in a great location with respect to Chicago, being in the south suburbs.”

Lansing Municipal Airport continues to change and evolve with the times. One person who knows more about that than most is John DeLaurentiis, who has been the airport director since 2008. He took over from Bob Malkas, the namesake of the airport driveway dedicated in 2011, who served as director for 23 years.

“When we move towards the future, there needs to be some connection to the past,” DeLaurentiis explained. “Airports are more than just bricks and mortar and airplanes. They’re people and people’s lives, and they’re tied into the history of the Village of Lansing.”

Malkas isn’t the only prominent figure in the airport’s history. In July, an observation area named Palmer Square Airport Observation Park was dedicated in honor of the former manager of Associated Air Activities, Wade Palmer. Associated Air—a company Babiak used to rent planes from—operated out of Ford Hangar for 30 years.

“Wade Palmer was part of this airport even before the Village owned it, I believe,” DeLaurentiis said. “Once he left the airport, the idea was to commemorate that in some way. Because you can’t dedicate anything at an airport for non-aeronautical use, we came up with the notion of an observation area.”

While small, the area is a pleasant place to sit and watch planes take off and land in the shadow of Ford Hangar. DeLaurentiis said there are still improvements to be made, but in general, that northwest corner of the airport—also home to the Lansing Veterans Memorial and the POW MIA fountain—is increasingly becoming more of a public space, following the example of other airports in the country. DeLaurentiis explained he wants these public spaces to be a gateway for people both new to Lansing and familiar with it to become more exposed to aviation and the Lansing Municipal Airport.

“There are people who fall on both sides of the line regarding public space and use at the airport,” DeLaurentiis said. “From the FAA perspective at the national level, it’s accepted. At the local level, the pilots usually think, ‘That should be our space and we should be using it for something we need.’ They forget that…without the public funding, this airport would not exist.” 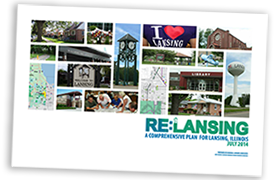 As far as plans for the future of the airport, they mainly focus on modernization and expansion. According to the 2014 RE:Lansing Comprehensive Plan and a 20-year layout plan for the airport put together in 2009, growth of the airport’s territory, new buildings, and longer runways could change the face of the airport as we know it. As the RE:Lansing plan states, “The long-term vision for this area of Lansing should balance the evolving needs of the airport with new opportunities for commercial and neighborhoods development, ensuring that the airport remains a vital piece of the community.”

More than a hangout for pilots

DeLaurentiis added to that by saying a goal of his is to change the culture around airports into something different than a hangout for pilots. He especially wants to get younger families, particularly kids, more interested in the airport.

“There’s still a bit of controversy on the field,” DeLaurentiis said. “There’s still folks flying into here who believe that airports should be places where pilots convene to talk about steel and gasoline and oil and aviation. But there’s another group that says, ‘I’m an attorney and I paid a million dollars for my plane. I like to fly on weekends with my family, and I just need a nice place to stop with my wife and kids while I fuel.’”

This notion is what brought about the welcome center and the restaurant at the airport. Formerly a pilot’s lounge where women and children were generally excluded, the building that now houses Lynnie Ques has become a huge attraction for local families and pilots from out of town.

“We felt that there needed to be more of a family transportation attraction here, in addition to just being a pilot’s airport,” DeLaurentiis explained. “And the Village has supported that. We need to not only modernize the buildings, but modernize the thinking around this airport.”

Getting ready for take-off

The airport’s history has had its fair share of ups and downs, so to speak. Financial woes and competing ideas of how the space should be used may never fully abate. But today’s Lansing Municipal Airport is a unique and precious asset, and there are people fighting to keep it that way, from pilots to village officials.

Babiak’s favorite part of flying, he said, is getting a different view of something he’s seen a million times.

“Just getting up there and seeing the earth from a different perspective is amazing,” he said. “You get a nice clear day, and you can fly along the lakeshore. You get a different view of things, and it’s exhilarating.”

It sounds like a different perspective of the airport, and aviation in general, is what will shape its future.