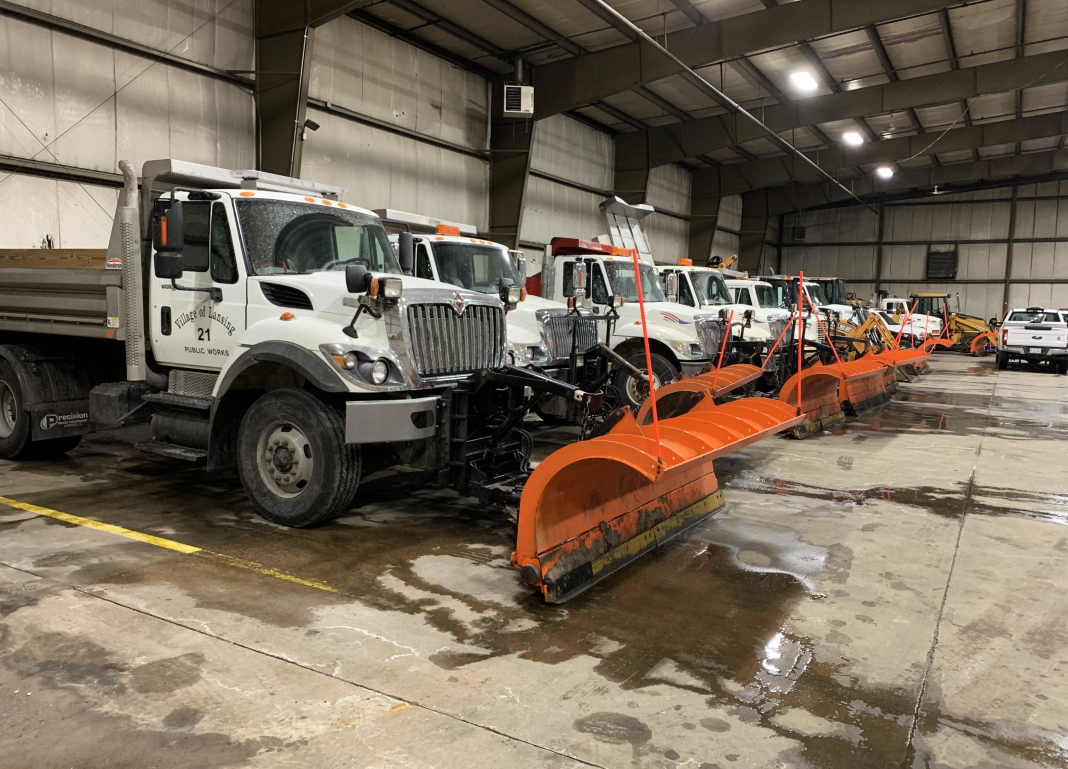 LANSING, Ill. (February 3, 2022) – The heavy snowfall over the last couple of days has cancelled work and school obligations for many. But for those at Lansing Public Works, there were no cancellations or virtual alternatives. Instead, three shifts of dedicated snow-clearers have been hard at work starting late Tuesday night salting, plowing, and trying to make transportation possible for those who need to get around the village.

Forecasts leading up to Tuesday night promised heavy snow, and the weather delivered on that promise, dumping just over a foot of snow in Lansing on Wednesday, according to the National Weather Service.

Public Works Director Gary Richardson made the call at about 11 p.m. on Tuesday night to start sending plow trucks throughout the village, spreading salt on main roads and starting to drop plows as the rain turned to snow overnight.

“We’d already decided that day we were probably going to be working overnight,” Richardson said.

As snow started to accumulate, the removal operation took the form of three major phases. The first was clearing main roads.

The largest streets in Lansing are plowed by either county or state trucks, including Torrence, Burnham, 170th, 186th, Glenwood-Lansing, Thornton-Lansing, and parts of Wentworth.

Richardson said trucks paused spreading salt in some areas on Wednesday to focus on plowing and salting Lansing’s larger intersections.

“We were salting main roads and intersections, and once we get a handle on that, everything else falls into place because a lot of times cars turning off the main roads into the side roads track the salt with them. They actually help us a lot. But overnight, it’s hard when you don’t have that much traffic,” he explained.

Phase two was plowing side streets throughout town, “We feel we have everything open as of right now,” Richardson said on Thursday morning.

Public Works has now moved to a third phase, which is clean-up work on side streets and continuing to spread salt.

Shifts, trucks, and all hands on deck

Lansing Public Works is split into three shifts, titled Red, Green and Blue. Richardson said each shift has their set working hours on a normal day, but during a large snowfall, the shifts overlap by necessity. The snow-clearers working on Tuesday night, for example, started at 11 p.m. and worked until 3 p.m. on Wednesday. The shift that came in at 7 a.m. on Wednesday worked until around 11 p.m.

“I try to keep people in the truck for no more than 10-12 hours,” Richardson said, explaining that there are always other tasks to do as well.

Each shift has 15-17 people, who are tasked with using the Village’s 12 large snowplow and salt-spreader trucks. Public Works uses smaller trucks to plow village-owned driveways and parking lots, and is also responsible for clearing village-owned sidewalks.

“From Tuesday at 11 p.m., there was never a down time where our trucks were not on the road, and I’m proud of that,” Richardson said. “I’m proud of the mechanics that keep these trucks in operational order. We had a couple that went down in the middle of the night and they jumped right on it and got them back up, so we really had no down time when it came to vehicles.”

Another help for the LPW has been a lack of other emergency calls. As of this writing, the department had not had any water main breaks or other major issues arise since the start of the storm.

Richardson said on Thursday morning that he had been on the job since coming to work on Tuesday, over 48 hours. During that time, he’d been overseeing operations, keeping the Public Works yard clear of snow, and occasionally heading out in the village to clear snow where needed.

On one trip through the village, Richardson saw an elderly woman trying to clear deep snow off of her driveway.

“95 years old and trying to shovel her driveway. … I happened to be going by, so I sent a small truck over to help her out,” Richardson said.

“We’ve helped out quite a few people. Stranded, seniors, others. … Everybody has been out doing their best to help,” he added.