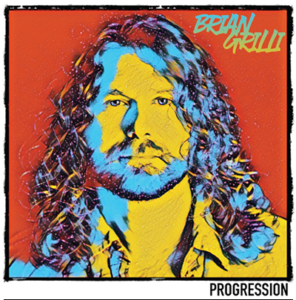 LANSING, Ill. (April 8, 2020) – Indie Americana/Country Artist Brian Grilli is announcing the release of his newest album “Progression” on Rugby Records April 24, 2020. Progression is a retrospective look at Brian and his musical journey. From his time with the bands Rumble Fish and The Glory Hounds to his venture into solo territory, “Progression” showcases his growth in writing, his change in sound and vision, and his maturity as an artist.

This is not a greatest hits compilation; it is music never released nationally—demo, live, and alternate versions of songs from all the albums Grilli has been a part of. These songs feature longtime musical partners and friends such as David Waltrip, Ross King, Billy Shearin, Mark Dunn, and special guests like Dan Baird from the Georgia Satellites and Peter Keys from Lynyrd Skynyrd.

Grilli has written songs for “Sons of Anarchy” and the award-winning independent documentary Until It Hurts. He blends Southern Rock, Americana, Country, and Blues in his prolific songwriting, aggressive-yet-melodic guitar playing, and unique voice to form a familiar yet genre-busting sound.

A former US Navy Explosive Ordnance Disposal Technician and an Operation Enduring/Iraqi Freedom Combat Veteran, Grilli has made his music a means for him to give back to his community. He is a veteran ambassador for the Boot Campaign and is a proud voting member of the Americana Music Association.