LANSING, Ill. (November 20, 2018) – Indie Americana/Country Artist Brian Grilli has fond memories of Lansing, and he captured many of them in a 2016 music video for his song, “My Hometown”:

Grilli’s new single “California” is currently being played on many radio stations and is #52 on Billboard Indicator. Written by Grilli and Jeanette Poll, “California” is about a girl with big dreams and plans who finds herself in a bad relationship that eventually takes its toll. The story song is based on real events and is described as “sending a melancholy message while keeping an almost juxtaposed mid-tempo groove.”

Debuting in 2013 with “Damn Good Day,” Grilli got attention from the independent music world and the national music scene. The title track and first single climbed fast on the charts, reaching #1 on Indieworld. Brian has written songs for “Sons of Anarchy” and the award-winning independent documentary “Until It Hurts.”

His success is attributed to his prolific songwriting, aggressive-yet-melodic guitar playing, and unique voice. Brian blends Southern Rock, Americana, Country, and Blues to form a familiar sound that doesn’t fit neatly into any one genre. 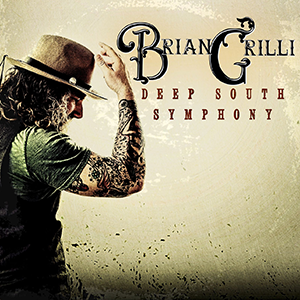 A former United States Navy Explosive Ordnance Disposal Technician and an Operation Enduring/Iraqi Freedom Combat veteran, Brian has made his music a means for him to give back to his community. He is a veteran ambassador for the Boot Campaign and an avid supporter of Combat Wounded Coalition, Wounded EOD Warrior, and Navy SEAL Foundation.

Grilli sang the National Anthem for over 10,000 people at the 75th Annual Sturgis Rally for the Buffalo Chip’s Freedom Day and is a proud voting member of the Americana Music Association.