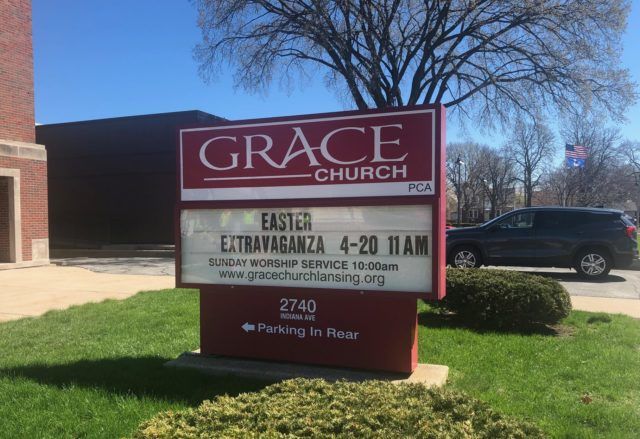 ‘We love being a good neighbor,’ explains Bill VanRamshorst

LANSING, Ill. (April 20, 2019) – Hundreds of people, most of them young families, eagerly visited Grace Church on Indiana Avenue Saturday for its Easter Extravaganza.

The event, which is put on every year by volunteers from the church, regardless of weather, included outdoor activities such as Easter egg hunts, bouncy castles, and horse rides. Indoors, there was a craft station, a face painting station, and a room full of prizes that children could win during the egg hunts. Out of about 5,000 eggs, a few hundred contained a prize voucher.

Bill VanRamshorst, the chairman of Grace Church’s outreach team, had a large part in orchestrating the event—though he was humble about it. He helped families navigate to different stations and kept everything running smoothly.

“It’s all about community outreach,” VanRamshorst said. “We’re a neighborhood church, so we love the opportunity to share love with our neighbors. We don’t really have the exposure of a busy road, but we love being a good neighbor.”

Throughout the late morning and early afternoon, children and their families went from station to station to partake in the festivities. There were smiles and laughs everywhere—especially when a child pulled a “LARGE PRIZE” paper slip from a plastic egg and went home with one of five donated bicycles. Happily, she said she was going to give it to her younger sister when they got home.

Volunteer and six-year Grace Church member Angie Clark congratulated the girl and said moments like that are what inspire her to volunteer during the Easter Extravaganza each year.

“Bringing light to people and sharing that light with the community is my favorite part of this,” Clark said. “You want them to have fun and enjoy the event, but you also want to spread that message.”

The church does use the Easter Extravaganza to let the community know about their services, as well as teach them about Christianity. The event began with a brief gospel presentation by senior pastor Leroy Childress, and outside by the horse and pony rides, there was a blue “Prayer Tent” which was eventually crowded.

Pastor Childress, known as “PC” to the members of Grace Church, mingled outside with the families in attendance and handed out free Bibles in Spanish and English. The smiling faces of the children with prizes and full Easter baskets, he said, are his favorite part of the Easter Extravaganza.

“[Children] coming expecting nothing but walking away with a huge smile is what makes us do this every year,” Childress said. “It’s a safe environment where they can have fun and get together with the community. That’s the good stuff.”

Childress said while the weather was forecast as rainy and cold for the event earlier this week, he was thrilled to be able to host the Easter Extravaganza outdoors on a sunny, 50-degree day.

“We love to give to the community and allow them to have a chance to…slow down and hang out and do fun stuff,” he said. “If God provides, we’ll do it again next year.”