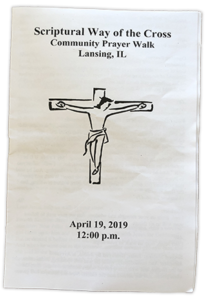 LANSING, Ill. (April 19, 2019) – The drastic drop in temperatures did not deter nearly 200 people from participating in this year’s Good Friday Stations of the Cross prayer walk. Bundled in winter coats against the 30-mile-an-hour winds, most of the congregants and the curious gathered at noon in the parking lot of St. Ann Catholic Church, while others joined the throng as it passed their homes along Ridge Road.

Following a large wooden cross, and escorted by Lansing police, the crowd walked south on Chicago Avenue to Ridge Road, stopping to observe the first station just as azure sky began to appear through the clouds. At 14 points between St. Ann and Trinity Lutheran Church, a Scripture was read conveying one of the milestones of the Biblical Holy Week story. The minister concluded the reading with a one-sentence prayer, and the crowd responded with, “Lord Jesus, help us walk in your steps.”

The 14th station, on the lawn of Trinity Lutheran Church, acknowledged Jesus’ placement in the tomb, after which the prayer walk participants were invited into the sanctuary for a penitential service.