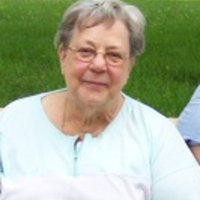 Diane Linstrot (nee Holmes), age 93, was welcomed back into the arms of Our Lord on October 6, 2022, in Beecher, Illinois. She was born on November 15, 1928, in Chicago, Illinois, to Arthur and Marion Holmes (both deceased). She was the wife of the late Carl E. Linstrot for 58 years 11 months; married on November 15, 1946, at St. Peters Lutheran Church in Chicago, the same church in which she was confirmed in 1943. Loving mother of four sons: David (Margaret), the late Mark (Jane), Ronald (Paula), and Daniel (Susan) Linstrot. Loving grandmother of Tammy Kryza, Melissa (William Jeffries) Linstrot, Christopher (Courtney) Linstrot, Michael (Jessica) Linstrot, Brittany (Lawrence) Fitzpatrick, and the late Richard (Jackie) Schneider. Great-grandmother of: Nathan and Tristan Kalvig, Nate, Will, Diane, and Mariah Jeffries, Zachary, Taylor, and Brooke Schneider, Mia and Evie Linstrot, and Wren and Caitriona Fitzpatrick. Sister of the late Arthur (late Joyce) Holmes, the late Barbara (late Richard Sr.) Lucas, and John (Barbara) Holmes. Sister-in-law of the late Harold Linstrot and the late Evelyn Farmer. Aunt and great-aunt to many nieces and nephews. She was a dear friend of Edna and Nick Johnson (both deceased) and Bob and Kay Sampsell (both deceased), and her church family at St. Paul Lutheran Church and Good Shepherd Lutheran Church where she was deeply involved in the Alter Guild as well as many other functions of the church.

Diane and Carl were among the founders of the Dolton Boys Baseball League where she continued her devoted involvement for more than 25 years in various capacities—most notably known as “the candy lady” in the concession stand.

A visitation for family and friends will be held at Smits Funeral Home, 649 E. 162nd Street, (Rt.6/159th St.) South Holland, IL on Saturday, October 15, 2022, from 1 – 4 p.m. A funeral service will be held at 4 p.m. at the funeral home with services conducted by Rev. Michael Udoekong. In lieu of flowers, donations may be made to Good Shepherd Lutheran Church,16500 Woodlawn Avenue, South Holland, Illinois 60473.