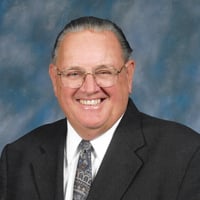 On Tuesday, March 8, 2022, God gathered to Himself His beloved saint, Donald Haak, 82 years. He was preceded in death by his first wife, Patheresa Jane Haak.

Don was the middle son in a family of five boys — the late John (late Ida), the late Robert (late Audrey), Ken (Delores), and James (Jim). He was preceded in death by his father, Nicholas (Claus) and mother, Henrietta (Dornbos).

Don loved God, his family, his relatives, and friends. In his life he put the good of others first. For example (and a great comfort) was when, in 2018, it was determined that he needed the care provided in a rest home, his concern was for Anita as he said, “I don’t want you to feel guilty.”

Don was a life-long member of the Protestant Reformed Churches – Oak Lawn PRC, South Holland/Crete PRC (in Illinois) for most of his life, Cornerstone PRC (Indiana), Edgerton PRC (Minnesota), and First PRC (Grand Rapids, Michigan). His greatest desire and joy was to go up to God’s house each Sabbath Day and hear God’s Word proclaimed. We are thankful for the preaching and teaching of these churches which opened up to us God’s way of salvation as revealed in His Word. Though wheelchair bound, Don went to church every opportunity he could — even in bitterly cold weather. When he no longer could go, he still expressed his desire that he wanted to go.

Visitation will be Monday, March 14, 2022, at 10:30 a.m. at Crete Protestant Reformed Church, 1777 Richton Road, Crete, IL 60417. The funeral, led by Rev. Carl Haak, will begin at 11:45 a.m. Family and friends are invited to the committal, at Oakland Memory Lanes – Dolton, IL. A funeral gathering will be held simultaneously in Michigan, for the students of Eastside Christian School and those who wish to join them, at First Protestant Reformed Church (2800 Michigan Street, NE, Grand Rapids, MI 49506). This will begin at 12:45 p.m. EST. Those gathered will listen to the funeral via live-stream after which Don’s pastor, Rev. Rodney Kleyn, will address them.