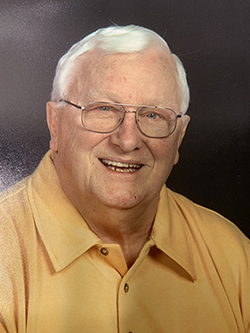 Mr. Ketchmark was born on December 28, 1931, in Peoria, IL. He attended Loras College in Dubuque, IA, and though a dedicated “Duhawk”, he had a penchant for the “Fighting Irish” and never missed a Saturday Notre Dame Football game! Upon his graduation in 1953, Dan proudly served in the United States Army, and throughout his life he continued to hold immense respect for the men and women who served their country in all branches of the military. He worked for Old Republic Life Insurance in Chicago for 33 years. Upon retiring he left the cold winters and daily commutes behind to enjoy the warmth and retirement of the Phoenix, AZ, area.

He is survived by his brother Giles “Jerry” Ketchmark; his seven children Kevin (Lucia), Tim (Janis), Cindy, Patty, Michelle Jaranowski (Todd), Danny (Jill) & Julie; his children’s mother Mary Ketchmark; 19 grandchildren, and 5 great grandchildren. He was preceded in death by his parents Stanley and Lucille Ketchmark and his devoted and loving friend Claudia Szopa.

A memorial Mass will be held on June 17, 2:00pm, at Christ Our Savior (formerly St. Jude the Apostle) in South Holland, IL, with an opportunity for family and friends to gather during the 30 minutes preceding the services. A private burial for internment of ashes will take place at St. Joseph’s Cemetery in Peoria, IL, the following afternoon.