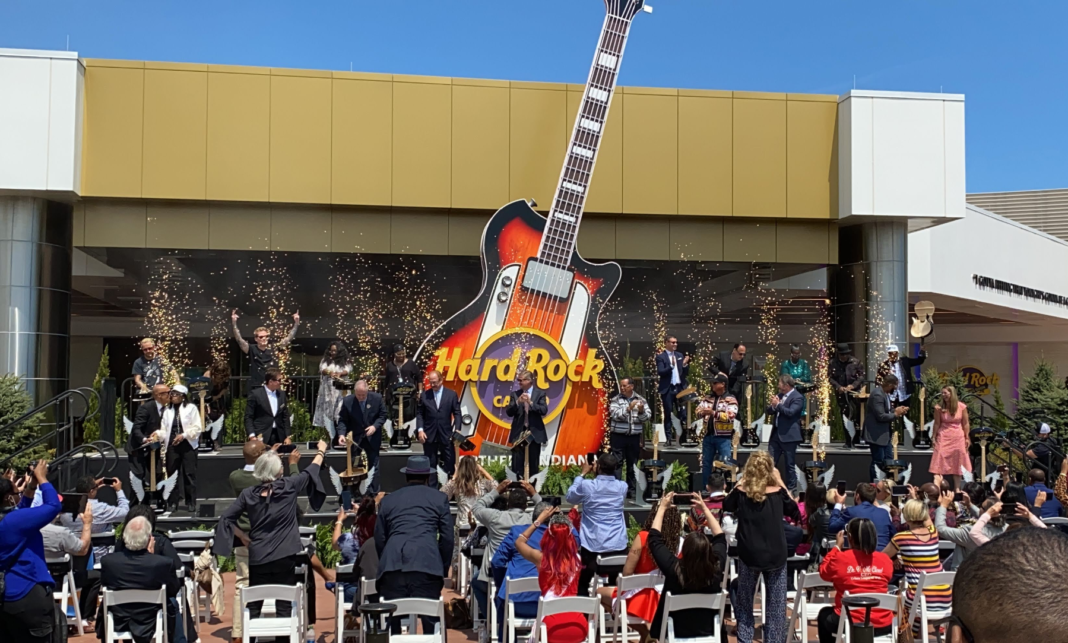 by Josh Bootsma and Melanie Jongsma

GARY, Ind. (May 14, 2021) – Long before any Hard Rock Casino, Tito Jackson remembers when Gary, Indiana, was a vibrant community. He and his brothers — Marlon, Jackie, Jermaine, and of course Michael — grew up in a small house on a corner lot next to Roosevelt High School. It was the 1950s then, and early 1960s, and the US Steel mill in Gary employed up to 30,000 people, including Joe Jackson, father of the famous Jackson 5. Gary streets were lined with flourishing businesses, and Gary schools were filled with optimistic children. It was a place of community and opportunity.

On Friday, May 14, executives, music stars, and the local community — including some of the Jackson family — gathered to celebrate the opening of Hard Rock Casino Northern Indiana, an endeavor they hope will start to bring more opportunity back to the once-thriving city.

“We left in the 60s,” remembers Marlon Jackson, “and from that point on it seemed like things just started to go downhill.” The five brothers officially became The Jackson 5 in 1965, and by 1967 they were performing in Chicago venues. By 1969 they were touring nationally and didn’t see much of Gary anymore. As US Steel faced competition with international rivals, steelworkers were laid off. Families left the town, searching for new jobs. Schools closed. Small businesses shuttered. “Things just seemed to move out and never come back,” Marlon said.

Singer/songwriter/producer Deniece Williams has similar memories of her childhood in Gary. “This was a very vibrant city,” she said. “Lovely people here. It was a great city to be a part of.” Raised in a Christian home just a few blocks from the Jackson family, Williams has warm memories of Gary schools and teachers who invested in her. After college, she and her classmates moved away and took different paths to success. She was surprised the first time she returned to visit family. “Gary just turned into a place that I didn’t recognize,” she said. “It was difficult to see that.”

Williams and the Jacksons were thrilled to learn that Hard Rock Casino had chosen Gary, Indiana, as the location for their newest venue, a $300 million entertainment complex that includes a massive gaming space, five food venues, a retail shop, and a 1,954-seat Hard Rock Live performance venue. Work on the 200,000-square foot entertainment complex started in early 2020, when Tito and Marlon Jackson — along with their brother Jackie — helped break ground on the project.

The casino is located at 5400 West 29th Avenue, just south of I-80/94 at the Burr Street exit and about five miles west of the home the Jackson family grew up in.

“I’ve been coming back to Gary off and on since I left Gary,” Tito Jackson said. Both he and Marlon visited their childhood home at 2300 Jackson Street the day before the Hard Rock Casino’s opening. The modest two-bedroom home sits in a tidy, fenced-in yard and nods back to an earlier time in Gary’s history.

“I tip my hat to the Hard Rock for taking the first step in stimulating the economic growth of Gary, Indiana, because now this is going to go back the community through the taxes … The jobs that this casino has created for this area is unbelievable. So that’s the first step and first start. And you’ve got to start somewhere,” Marlon Jackson said.

Williams agrees, and said, “I’m excited, elated, to see what’s going on in Gary. It’s taken a long time. It’s the city that — every year that I would come back, I’d go to the mayor’s office and say, ‘OK, what can we do?’ and I’ve done that for about 25 years, or maybe even more. So it’s exciting to come home and see all of those changes and everything that’s happening.”

Local leaders also praised the project. “Today we’re here to say welcome to Hard Rock Casino of Northern Indiana — in Gary!” said Gary mayor Jerome Prince to start his speech ahead of Friday’s guitar-smashing event — a Hard Rock tradition used to mark the opening of a new facility. “A $300 million investment doesn’t happen every day, and to that extent, on behalf of the City of Gary, all of its elected officials, its citizens, and employees, I say thank you all.”

“It seems like yesterday when we filed the legislation to get this facility to be located here in Gary, Indiana,” said State Senator Eddie Melton of Indiana’s Third District. “We were met with a lot of opposition, a lot of opposition at different turns, some was extremely difficult, but we were victorious. I want to thank everyone that was a part of the process … This is a Gary project and Gary deserves the best.”

Marlon and Tito Jackson also spoke at the event. A video of their comments is below:

The event drew a crowd of at least 300 as speeches were made leading up to the shattering of 20 guitars.

Hard Rock Casino Northern Indiana President Matt Schuffert said the casino has 80 table games and nearly 1,600 slot machines, though not all are currently in use due to COVID social distancing regulations.

One of the casino’s most impressive aspects is the quantity and diversity of the memorabilia on display. Guests can see a jacket Elvis wore next to one that Lady Gaga sported. They can see Diana Ross’s dress on display high above the casino floor along with the two-tone dress Deniece Williams wore during her “Let’s Hear It for the Boy” music video. Prominently placed are pieces from the Jackson family, including a display of Michael Jackson’s “Beat It” red leather jacket and a quintet of red costumes once worn by the Jackson 5.