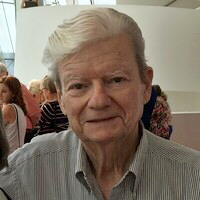 Bob was born at home in Chicago, Illinois on July 16, 1937. He attended Dixon elementary and Hirsch High School where one of his after school jobs was working at a grocery store, where one of his more notable deliveries was to Al Capone’s mother. His family moved to Lansing just before his senior year, where Bob graduated from Thornton Fractional Township. Bob was an avid lover of music and started a jazz band while in high school. He received professional instruction from the renowned Roy Knapp at the University of Chicago, which Bob reflected on with great fondness throughout his life. Music was his passion, but it was a young high school sophomore who would capture his heart while interviewing him on the topic of percussion.

Viergie Lyder would marry him two years later and on April 4, 2021, they celebrated 62 years of marriage. Bob enlisted in the Army and after they were married, he and Viergie relocated to Hakuto, Japan where Bob’s expertise in coding captured the eye of the Central Intelligence Agency. He served our nation for several years living in a host of countries before retiring from the agency and beginning a career in insurance.

Bob worked 32 years as an expert in Taft Hartley health plans; initially beginning his insurance career with John Hancock and eventually forming his own insurance consultancy in 1985, Administrative Consulting Services, Inc. (ACSI). He was a man of great integrity and firmly believed in supporting the working man, creating insurance plans which took very good care of the union workers and their families, while maintaining affordable rates for both the workers and the employers.

Bob retired from his company in 2002 and dabbled in his second love — building. Throughout his life he built out the basements of the homes he lived in with his family. They were spectacular spaces, with great detail toward design and function. His “man caves” always spotlighted his vast & impressive record and media collection and, if asked, he was always willing to play an assortment of music on his record player and take you on in a game of pool — which he generally won fair and square. Bob was great pinochle player, a game the family played many a night. He loved John Wayne movies, traveling the terrain of the west, trying his luck in Vegas, eating lemon meringue pie after a homemade spaghetti dinner, and most of all cooking up a delicious batch of beef and noodles — his own recipe.

Of greatest note, Bob was a man of boundless faith in God and along with his wife Viergie kept Christ as the center of their household, their marriage, the raising of their children, his career, and of his life as whole. His family awaits the day they are each reunited with him in Heaven. Bob was loved by many and he will be truly missed.