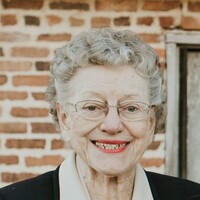 Mary Lou was raised in a small home in Calumet City, IL with seven siblings. There she learned how to be frugal and would often speak of how her family ate from the food grown in their garden. She graduated early from high school and went on to her first job working for Pullman (Coach) Company. In 1948, Mary Lou married her beloved Al. Together they raised their three children in Lansing, IL. She was a devoted, loving wife and mother. With Al’s untimely death in 1971, she was forced to return to work and continue to raise her three children on her own. Her shorthand and organizational skills led her to a career as an administrative secretary.

She worked hard to provide for her children financially while always keeping her family in the forefront of her life. In 1995, she married her second husband, Bob, who was a widower. Together, while living in Lansing, IL, they enjoyed spending time with their families. Their winter months were spent walking the beaches of Marco Island and collecting shells for future craft projects that Mary Lou would make.

Through the years, Mary Lou enjoyed gathering with family, playing cards with her lady friends, and bowling. She was a lifelong member of St. Ann’s Church in Lansing. Mary Lou preferred to lead a quiet life, and her uprightness brought respect by all who knew her. She was admired by her family and friends for her vibrancy and zeal for life regardless of the difficulties that she had faced. Mary Lou always had time to talk with her children and their spouses, her grandchildren, nieces, nephews and friends. She sincerely cared how they were doing and was always asking them about their life. She lived independently and vibrantly until the end, just as she had always desired. She will be greatly missed by her family and all who knew and loved her.

Visitation with the family will be held on Wednesday, December 16, 2020 from 9:00 am until the time of a memorial service at 12:00 pm noon at the Schroeder-Lauer Funeral Home, 3227 Ridge Road, Lansing, IL.