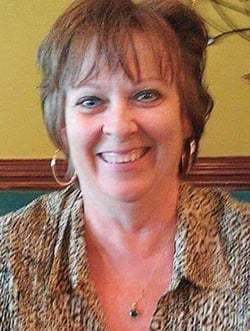 Holly was the daughter of Alfred H. and Annette M. Gleghorn who preceded her in death. She is survived by the love of her life Dave Larson, Crown Point, IN, and beloved daughters Ashley Linn, Crown Point, IN, and Kelsey Linn, Lowell, IN. Holly loved spending time with her family, including her six grandchildren: Willow, Ellie, Jason, Elias, Briana, and Ally; as well as her three step-children: Kristen (Tom) Hansen, Medaryville, IN, James (Heather) Larson, Valparaiso, IN, and David Larson, Guntersville, AL.

Holly raised critters of all types throughout her life, most currently Annie and Rupert her loyal canines. She was devoted to training dogs, with a special love for American Pit Bulls; raising a National Grand Champion, Stewie as well as other award winning dogs. She was raised in the Catholic faith, was active in the Moose Lodge, enjoyed nature, gardening, bowling and being with Dave; especially the old times riding their motorcycles together. Before many women joined the trucking industry, Holly earned her license to drive the big rigs and did so for several years. Holly was known for her joyful sense of humor, love of life, devotion to family, loyalty to friends, and being kind of heart. Though she struggled long she never complained but remained strong, positive, and loving life to the very end. Holly showed others that no matter what you were going through life was worth living to the fullest, and she did that by loving to the fullest.

In lieu of flowers, memorials may be made to Dave Larson, Kelsey, and Ashley Linn. Due to COVID, a memorial service is pending.