LANSING, Ill. (June 15, 2020) – “This is what Lansing should be,” said Pastor Dave Price as he marched along Burnham with hundreds of other peaceful protesters. He was referring to the diversity of ages and skin colors that had set aside a Saturday afternoon to express support for their neighbors and friends who are particularly affected by negative stereotypes.

A newly formed group called Concerned Citizens for Lansing, IL, had organized the event. Founded by Dan Stellfox, Concerned Citizens describes itself as “a small group of concerned citizens hoping to foster meaningful change in our community.” The description of the demonstration, posted as a Facebook Event, says in part, “Our demonstration has many goals, but the most important is to promote meaningful change and action. We can no longer ignore the lasting and continual impact of oppression. It is our job to learn, educate, and foster an actively anti-racist village. We will ask members of our community to do their part in fighting the racism, injustice and discrimination that exists in both our country and our town. We will present demands, resources, and speakers to do so. We hope you will join us.”

Hundreds did join them. Starting with more than 100 in the parking lot at TF South High School (18500 Burnham Avenue), and picking up a few more along the route—Burnham to Ridge to the Clock Tower—and attracting more as the march culminated with speeches in the grassy plaza under the Clock Tower, by the end of the event an estimated 300 people were listening to the message.

More than a march

While Marvin Gaye’s “What’s Going On” played from loudspeakers that had been set up near the Clock Tower, the marchers filed onto the lawn and faced Ridge Road so they would be able to see the five presenters who would be speaking from a small hill.

“We gather today to support the Black community in Lansing. …We will spend the time we have together listening, learning, and challenging one another,” said recent TF South graduate Kimberly Luna in English and then in Spanish to welcome the marchers and prepare them for the next phase of the event—speeches and action.

The speakers had been chosen to address specific themes and audiences, and TF South graduate Sam Ogunbode served as emcee, introducing each of them with a brief bio. The roster included:

Tre’sean Hall was the next speaker, and he let the gathering know that two days before the event, the organizers paid $225 for a permit. Hall indicated that a donation jar was available for anyone who might be willing to give a few dollars to help cover that unplanned-for expense. The response was immediate, and within moments, a total of $575 was given:

Hall’s speech encouraged residents to hold elected officials accountable, and he provided a list of specific demands that Concerned Citizens for Lansing had compiled. “We would like to see not only the Lansing Police Department take action on this, but also the Mayor of Lansing,” he said. The list included:

“Thank you all for your time,” said Hall in closing, “and I really hope that the Mayor, the Village and elected officials, and the Lansing Police Department really take our demands seriously.”

Hall’s speech set the tone for the closing speaker, Jadyn Newman, a 2019 TF South grad who is currently studying Justice and Law at American University in Washington, DC. Newman offered specific ways for people to get involved.

Full transcripts of these speeches have been submitted for publication in our “Lansing Voices” feature and will appear as posts throughout the week.

Emcee Ogunbode returned to the microphone and reminded the crowd that the afternoon rally was only a starting point. “We should continue on in this,” he said, and he pointed out that a voter registration table was available so that people could make sure their voices are heard. At another table, petitions could be signed in support of the demands that Hall had outlined. Ogunbode also reported that the money raised above the cost of the permit would be donated directly to the NAACP, who also had an information table set up at the event. (Note: In correspondence after the event, the Lan-Oak Park District reported that the Lansing Police Department had turned in the permit and fee to them. While both the park district and police department stated that it had not been their intention to require a permit fee, the police department acknowledged it collected the fee as a result of a miscommunication between the park district, the Lansing Police Department, and the protest organizers. The park district intends to refund the $225 the organizers submitted.)

Pastor Nate was invited to offer a closing prayer. “It is vital that we do not leave here and stop the message,” he told the assemblage. And to the black community he said, “You have more allies than ever before.”

“Get on fire for something that matters and truly make this world something different.”

Participants in the march and other Lansing residents hoping for change can stay informed by visiting the “Concerned Citizens of Lansing IL” Facebook page. 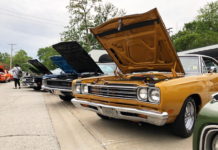 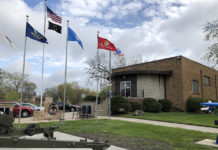 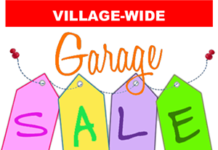