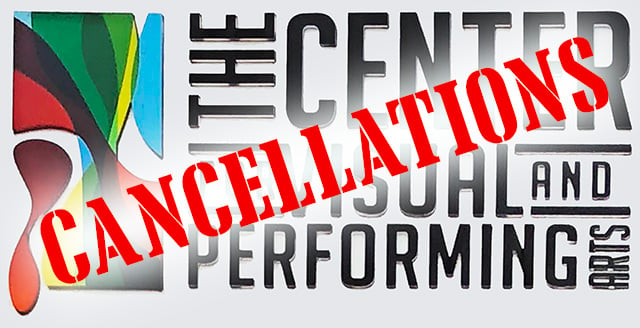 MUNSTER, Ind. (March 13, 2020) – After Indiana Governor Holcomb’s directive announced Thursday, March 12 about gatherings over 250 people being prohibited, Theatre at the Center and The Center for Visual and Performing Arts has made the decision to suspend all public events and performances at our theatre through April 29, effective immediately.

Theatre at the Center has cancelled all the remaining mainstage performances of Almost Heaven: John Denver’s America, March 13-22. In addition, the following special event performances have also been cancelled:

All Theatre KIDS classes have been suspended, as has the Theatre for Young Audience run of Aladdin scheduled for April 13-19, and The Prince and Princess Party in the CVPA Dining Room on April 18.

The TATC 30th Anniversary Big Band Concerts and Dinner on April 18 have also been cancelled.

The Ultimate Doo-Wop Show on April 5 presented by Henry Farag has been postponed and will be rescheduled at a later date to be announced.

“The safety and health of our patrons, performers and staff is our highest priority,” read a statement from the Center. “As a nonprofit organization, we are asking all ticketholders if they would like to convert the value of these tickets to a tax-deductible donation to help offset the Theatre at the Center’s significant loss of revenue during this difficult period. We are also prepared to issue a gift certificate in the amount of your purchase that will be good for any of our future performances.”

At this time, all events after April 29 will remain in place.

For questions about Theatre at the Center cancellations, please contact the box office at 219-836-3255. During this time, the lobby and box office will also be open from 9:00am–5:00pm, Monday through Friday, but closed on weekends through April 29.

Food service operations as provided by Chef Joe Trama and Trama Catering at The Center for Visual and Performing Arts—including the weekly Sunday Champagne Brunch and the Easter Brunch seatings on April 12—have also been cancelled. Patrons and guests should continue to visit www.TheatreAtTheCenter.com and www.CVPA.org for further developments. Dining events and food service questions can be directed to Trama Catering at 219-836-1930, x2.

Theatre at the Center is located inside the Center for Visual and Performing Arts at 1040 Ridge Road in Munster, Indiana 46321.