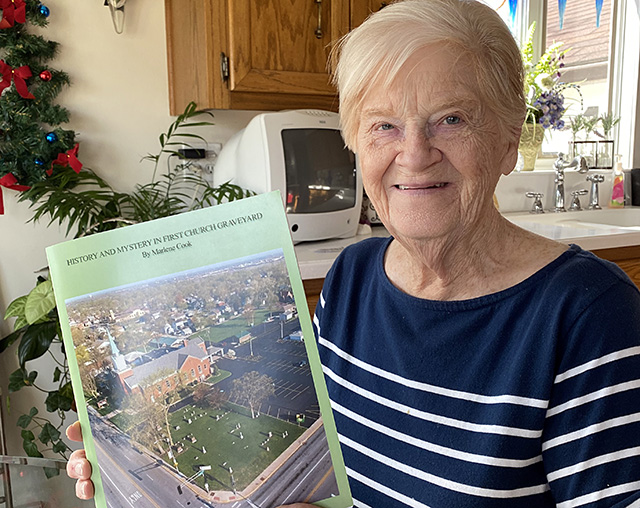 LANSING, Ill. (January 2, 2020) – If you’ve ever been stuck at a red light on Burnham Avenue and Ridge Road, you have probably peered out your window at the graveyard on the northwest corner of the intersection. And maybe you’ve noticed a grave marker with the name of Minnie Kooy, 1896–1917.

If you’ve wondered what happened that ended Minnie Kooy’s young life, you aren’t the only one. Several years ago Lansing resident Dan Bovino had that thought. He asked around to see if anyone had answers.

That’s when Marlene Cook, who has been a member of First Church PCA for 25 years, got interested. “It went up on Facebook, and people started giving me information, and I thought, ‘I wonder what the stories are of the other people that are buried there?’” she said. Bovino provided Cook with photos of all the graves that had names that could still be read. “I started researching and then got obsessed and then decided to write a book.”

History and Mystery in First Church Graveyard was published in late December. It took about three years to put together the 51-page book that accounts for those with headstones in the church’s graveyard as well as many without headstones. Cook noted that in looking at the aerial photo on the cover, it appears that space remains, but there are many graves without markers, so in reality the graveyard is full, having reached capacity in the 1960s. Cook also noted that the terms graveyard and cemetery are not one and the same. A graveyard is actually a type of cemetery that is connected to a church.

So, why was it so hard to find out what had happened to Minnie Kooy and those who lie near her? A previous structure that had housed the church was destroyed by fire in 1945, and records of the burials were reduced to ashes. That meant that Cook had quite a job ahead of her. Information came from conversations, records provided by family of the deceased, newspaper obituaries, online archives, genealogy websites, and other sources.

The land for the church was purchased in 1860, and it had a number of names over the years—first known as North Creek of Thornton Holland Reformed Church, then Lansing Church, and later First Reformed Church of Lansing. Today it is known as First Church PCA. The burial ground was known as the Lansing Cemetery, which is how it was referred to in newspaper obituaries.

To further confuse matters, at one point all but two of the church members left and started a new church further east on Ridge Road—it is now the Munster Christian Reformed Church—but the graveyard beside that church was also referred to as Lansing Cemetery. So when she’d come across an obituary, Cook would also spend time in Munster combing through burial records to determine which “Lansing Cemetery” individuals were actually buried in.

One person she talked to in doing research for the book was Pete Jansma, who dug that final grave back in 1965 (the first burial there was in 1864). He’s still a member of the church and recalled the difficulty they would have in digging down into sand. For those who were buried there, the plot was sold for $5 and it cost $1 to dig a grave, or 50 cents for a child.

In History and Mystery readers will also learn about how the graves even extend beyond the graveyard and beneath the pavement—something that was discovered during construction in the 1970s. “There are graves under the roads, and the people buried there are known only to God,” said Cook.

Cook was fascinated by learning how many of the members were farmers who worked that land along Ridge Road, and how many of their descendants still worship at the church, some being six and seven generations down the line.

History and Mystery in First Church Graveyard is available for purchase at the First Church PCA office for $12, or Cook can be contacted at [email protected] for a copy.