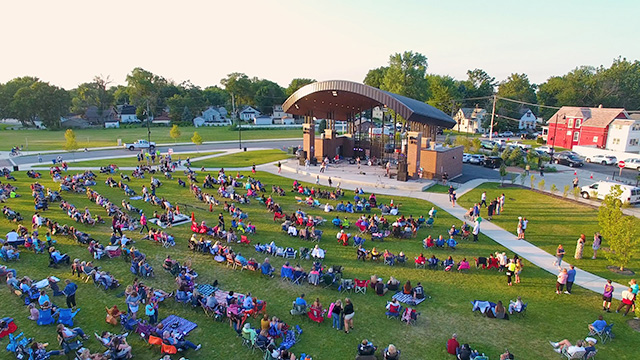 Podgorski: “That venue is going to keep Lansing relevant”

LANSING, Ill. (January 3, 2019) – “We’re in the concert business now,” said Village Administrator Dan Podgorski in a conversation about Fox Pointe and its first full season. “We’re in the entertainment business. That’s a unique position for a municipality to be in. We’re learning right along with everybody else, and we’re interested in the feedback. The operational policies are still being formed, and they probably always will be.”

“We went into this ambitiously,” added Village Communications Director Ken Reynolds, who has been deeply involved in the planning and execution of Fox Pointe’s vision since its conception. “A lot of venues when they start up don’t go out and book two dozen or more events, so that was either incredibly foolish or incredibly smart depending on your perspective. We think what it did was give us 25 trial runs.”

The two main concerns for Fox Pointe’s first season that were identified after Autumn Fest 2018 were parking and noise levels—particularly for the venue’s immediate neighbors. But Reynolds said he was pleased when there were “very, very” limited calls to complain about parking and “overwhelmingly positive” feedback regarding noise.

“We clearly have enough parking with the crowds we’re having, and it’ll get better with the new lots we’ve established,” Podgorski added.

Fox Pointe Director Tony Troncozo said the most frequent complaints he heard throughout the season were about the length of lines at the concessions building and the price of drinks. Improvements to that building, as well as potentially eliminating tickets as a form of payment, should help to streamline that process going forward.

Protecting the venue (and the people)

However, most of the Village’s concerns involve better protecting Fox Pointe like the multi-million-dollar investment it is. That goal is one of the main things being worked towards for the venue’s future.

Security footage from the venue shows kids and teenagers skateboarding on the stage and climbing up the rails. As a result of incidents like those, security enhancements have been added—additional cameras and removable fencing to enclose the venue’s perimeter.

Podgorski said that while he wants to maintain the community aspect of Fox Pointe, there are limits.

“Now that we’re seeing that people think it’s a park, we’re trying to convey that it’s not,” he said. “You wouldn’t be able to roll up to Hollywood Casino Amphitheater in Tinley Park and just hang out there. There’s a lot of these things we’re still talking through, because this is our first year.”

Reynolds added that this doesn’t mean these “perimeter enhancements” will be imposing or close off Fox Pointe entirely when there isn’t an event taking place. Posted public hours, similar to those at a forest preserve or other public park, are being discussed so community members would still be able to take morning jogs through the venue or stop at the pavilion to eat lunch during their break from work.

“We’re not going to be out there with armed guards,” Reynolds said. “Still, it’s important to try and maintain what the vision was of this place, that it’s open to the community in hours where it can be regulated.”

More marketing, permanent signage, and the development of an official logo for Fox Pointe are three more big goals the village will be working towards. Reynolds mentioned the potential installation of a sign on Ridge Road near Henry Street, as well as a deal in the works for billboard space along I-80. An identifying sign at the main entrance, as well as a streamlined street corner signs with the current week’s event are also being discussed.

The financial impact of Fox Pointe on the nearby Ridge Road businesses and the village as a whole is an unavoidable topic as well. The potential for Fox Pointe to be an economic driver and an attractor of new, modern businesses—such as wine bars, microbreweries, and restaurants—is huge.

“The old TV-video store at 3414 [Ridge Road] to me is screaming for a wine bar or restaurant of some sort,” Podgorski said. “It’s got the flower pots and the benches outside, and it leads right into Fox Pointe. How could you not want to put an eatery there? Some people might choose to sit and watch the concerts from there. …It just takes a couple businesses to transform the way people look at [Ridge Road].”

The changes have already started. Troncozo said he’s personally seen and heard about the venue’s impact on local businesses.

“I was talking to a bartender at Kilroy’s, and he’s depressed now because his Wednesdays are dead,” Troncozo said. “He said this is the best summer he’s seen in the five years he’s been there.”

Resident Kim Foster attended the November 5 board meeting and outlined her plans to completely revamp the former CJ Frank building (3425 Ridge Road) into a new business because of Fox Pointe.

“I really wanted to do something that complements the clock tower and Fox Pointe,” she told the Board.

Podgorski said he has high hopes for what Ridge Road can become in support of, and as a result of, Fox Pointe’s impact.

“You get that couple from Orland or Naperville or Crown Point that drives through here and they have a great time at Fox Pointe,” Podgorski said, “and they walk up to Ridge Road and see One Trick Pony and all the places you can stop and hang out, and they go home and say, ‘Hey, Lansing’s kind of cool. Let’s go back.’”

Reynolds expanded on that metaphor by illustrating the importance Fox Pointe and Ridge Road could have on the first impression someone gets of Lansing as a village.

“[Fox Pointe] looks and plays like a premiere destination, which is what we want it to be, and we still have work to do” Reynolds said. “If Joe Smith from Frankfort comes to an event, when he leaves, we want him to say, ‘Wow, you’ve got to go check out Fox Pointe in Lansing.’ We get one shot at that.”

And what better way is there for a venue to draw in patrons than booking well-known acts? While Troncozo won’t officially reveal the names of any of summer 2020’s Fox Pointe acts until he has a contract with them, he maintains that national acts the likes of REO Speedwagon and Melissa Etheridge aren’t entirely out of Lansing’s grasp.

“I went and saw REO Speedwagon the other night at the Silver Creek Event Center—4,500 people, and the seats up front were $200,” Troncozo said. “We could do a general ticket for $45 or $50, and people will pay that. I’m hoping somewhere down the road we’ll be able to facilitate an act or two a year of that caliber, once everything’s in place.”

Troncozo confirmed that ticketed events are in Fox Pointe’s near future. But the Wednesday night concerts, he said, will still be free.

Ticket sales can only help Fox Pointe, however. From concessions alone, the venue made around $100,000 during its first season, according to Podgorski. That revenue, teamed with the revenue from a few thousand $25 concert tickets, could help the venue afford bigger acts, purchase more equipment, and maintain and renovate the grounds, among other things.

“This time last year, it would’ve taken a leap of faith for a sponsor to jump in,” Podgorski said. “But now, we have photos and videos, and we can say, ‘Here’s an overhead shot from Woodstock Fest,’ and I think sponsors will realize they have a good opportunity here.”

“I was very pleased by how much our patrons took ownership of keeping the place clean,” Reynolds said. “On multiple nights, there would be people commenting, ‘There’s nothing left on the lawn.’ And that was from a small crowd of 500 up to a 1,500-person crowd. It was a great testament to our patrons—it took care of itself.”

If there’s one thing that can be said about Fox Pointe’s inaugural season, it’s that Lansing definitely took ownership of its new premiere event location. Every Wednesday night for three months, hundreds of Lansing residents gathered to laugh, talk, eat, listen to music, and be a community. And the value of that isn’t something that can be written into a village budget.

“How do you even measure what it does for your town?” Troncozo said. “It all has to count—not just fiscally, but in the mindset of the community. That venue being there has upped the game for our downtown strip.”

It’s too soon to say for certain whether Fox Pointe lives up to the vision cast for it years ago. There have been lessons learned, and there are still plenty to be taught. But if the past is any indication, the future certainly looks bright.

“One thing’s for sure: that venue is going to keep Lansing relevant for a long time,” said Podgorski.