information provided by the Village of Lansing 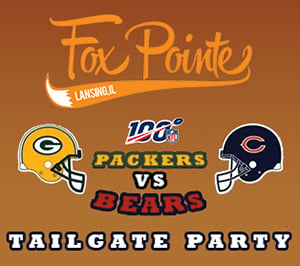 LANSING, Ill. (August 5, 2019) – On Thursday, September 5, the Village of Lansing will help kick off the 2019 National Football League season by hosting a Chicago Bears vs. Green Bay Packers Tailgate Party at Fox Pointe. The game will be broadcast on a giant 20’ x 12’ video wall with additional screens set up throughout the venue.

A Kids Zone will also be set up in the venue, as well as food vendors and other concessions.

Village officials are working with the TF South High School and Highland High School varsity football teams to arrange for their participation in the night’s events. “We are hoping to enhance the sense of community between the two schools,” said Ken Reynolds, Village Communications Director and former assistant athletic director at TF South. The two teams play each other the following evening, September 6, in Lansing.

The Fox Pointe Tailgate Party will begin at 5:30pm on September 5, with kickoff at 7:20pm.