LANSING, Ill. (March 12, 2019) – As we reported last month, in recent years Lansing has seen an increase in its Hispanic population, and as a result, Hispanic dining options within the village have also increased. From Mexican restaurants to grocery stores and produce, these businesses offer authentic cuisine and fresh ingredients.

El Burrito Express—at Burnham Avenue and Bernice Road—has been open for eight years, serving a number of Mexican specialties. The De La Torre family lived in Chicago when they opened the restaurant, but they now reside in Lansing. “When we first came here, people were really welcoming,” said Moises De La Torre. “We had people who would come in all the time and tell us about the history of Lansing. Our customers are very friendly.”

Everyone in his immediate family has worked at the restaurant—his parents, brother, and sisters. Their mission is to serve up Mexican cuisine, and while they also offer American food, like hamburgers, their most popular items by far are tacos, burritos, and chimichangas, “for those who like fried food.” Steak is the most requested meat.

Two years ago, the building was upgraded on the outside, and since then they’ve been making interior improvements little by little.

“Everything made here is made from scratch,” said De La Torre. “People love our red and green salsa, and some people come in just for that.” He said that customers are also fond of a carrot and pepper salad, similar to a giardiniera. The salad also includes cauliflower, jalapeño, onion, and garlic, and it is served as an appetizer while you wait for your food to be brought to your table.

“We’ve been consistent with our food, using quality ingredients, and we make sure it just keeps getting better,” said De La Torre. The restaurant is open daily for dine-in or carry-out, and they also offer catering for groups of 20 or more.

When you dine at a Mexican restaurant in the area, it’s likely that you’re eating meat and produce supplied by Murillo’s Produce. Raymundo Murillo is a butcher and has been in the wholesale business for a long time. He is a supplier for several restaurants in the city and suburbs. In December, he opened Murillo’s Produce at 19261 Burnham Avenue, a mini market offering produce and groceries. In January a meat counter was added.


The opening of the store stemmed from Murillo making deliveries to Taqueria La Soga at 19267 Burnham. He noticed an empty storefront a couple doors down and asked if it was for rent. It was, and he moved forward in, starting his own store.


Murillo’s Produce is a family operation. Because Murillo runs a wholesale business, he is able to offer high-quality produce at cheaper prices than large supermarkets. “We’re little, but you can find everything you need here,” he said. “It was a dream for me to try to build this. It’s really hard, but the first year is going good, and people seem to like it.”

He noted that some stores sell lower quality products to make more money, but quality is more important than profit to him. “We want people to be happy. And they come back because of the quality.”

Besides typical produce you’d find in a larger supermarket, at Murillo’s Produce you can find more specialty ingredients for ethnic cooking—things like eggplant, dragon fruit, and fresh herbs.

Meat packages are available starting as low as $9.99 for a pound of ground beef, chicken leg quarters, first-cut pork chops, or chicken drumsticks. Large packages are also available, up to $299. You can also buy freshly-made tamales at the store.

The longest-running Mexican restaurant in Lansing is El Mariachi II on Torrence Avenue, which opened almost 19 years ago. It was a second location, following the original in Calumet City that opened 25 years ago and still exists. The owners of this family-owned eatery hope to open a third location in the next year, according to manager Jamie Ibarra.

Ibarra said that some of their most popular menu items are steak fajitas, enchilada suizas, carne asada, and steak tacos. They also offer fried ice cream for dessert, and the restaurant now has a liquor license so patrons are able to enjoy a Mexican beer or margarita with their meal. “We have a little bit of everything, from tacos to good dinner plates,” said Ibarra, “A lot of places say they’re authentic, but they’re not. Everything here is authentic and made from scratch.”

Ibarra said one thing that sets the place apart is the large number of meats to choose from. “Some places will only do chicken flautas. We have more options,” he said. Meat choices include beef, chicken, pork, steak, beef tongue, marinated pork (al pastor), or chorizo.

Three Roosters is the market that has been in the community the longest. Manager Daisy Herrera said that after eight years in business, customers are like family. “Most who come in here we know by name,” she said. “I’ve seen kids grow up coming in over the years. We hope to be around for a long time.”

Even with so many Hispanic businesses now in Lansing, Herrera said there isn’t really a competitive environment. With the size of Lansing and distance in between stores, she said people may tend to go to the closest one. “There’s enough to go around,” she said.

Located on the north end of town, on 171st Street, Three Roosters is a grocery with fresh produce and meat where you can also buy freshly-made hot food. Patrons can order to go or eat in the back of the store at one of the tables. The chefs make typical Mexican food like tacos, burritos, torts, and gorditas, but they also create daily specials. They plan to offer some vegetarian and seafood specials—like potato and cheese enchiladas—during the Lenten season.

Carne en su jugo is a popular item—a soup that includes beef, onions, whole pinto beans, bacon, and dried chili pepper—available daily and sold by the half gallon or the gallon. On weekends, the menu expands to include menudo, carnitas, and tamales. Herrera said they can also do special requests, and pretty much anything from the butcher shop can be made into a meal.

“We’ve gotten a good response from our customers, and everything that is here is because they’re buying it or they’re requesting those items,” said Herrera.

Tacos and tortas are best-sellers among the hot foods, and customers also like to create their own two-meat burritos. “It’s like a Mexican Subway,” said Herrera. “You can put whatever you want in them.” Catering is also available.

A couple doors west of Three Roosters you can satisfy your sweet tooth at La Michoacana. The Mexican ice cream shop has dozens of flavors of ice cream and paletas, which are Mexican popsicles made with chunks of fresh fruit. They also offer elotes (Mexican street corn) and walking tacos.

Both Tacos and Burritos Rancho Grande locations are open daily and open late if you’re having a late-night craving for a burrito, quesadilla, torta, or other Mexican specialty. They also serve a number of breakfast options.

If you dine in the Ridge Road store, check out the historic mural on the west brick wall, uncovered during building renovations. The owners restored it, and it’s a unique historic and artistic feature of the dining room.

Owner Jorge Trujillo plans to keep the Ridge Road location open, but he hopes to relocate his Torrence Avenue restaurant, currently at 2394 172nd Street, into the former Golden Crown building and renovate the plumbing, electrical, furniture, and facade. “The inside would be totally redone,” he explained at an August 21, 2018, Board meeting. “The property is over 50 years old. I could probably open it right now, but that’s not ideal. We really want to develop the property. It’s a great location.”

Writer’s note: Thank you again to Lilly Maciel for accompanying me to several locations and serving as a translator when needed.

Hispanic markets, grocery stores, and restaurants in Lansing include:

There are common Hispanic foods that most people are familiar with—tacos, burritos, quesadillas, enchiladas, fajitas—but other dishes may be less familiar. Before you head to one of Lansing’s Hispanic stores or restaurants, here’s a little guide to some of the food terms: 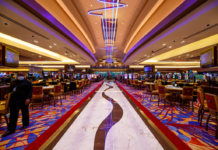 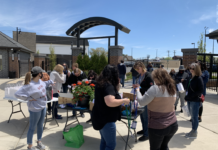