LANSING, Ill. (September 13, 2017) – Among Lansing’s diverse offerings of cuisine are several Mexican restaurants and markets that feature fresh, authentic meals in a sit-down or carry-out setting. You can’t go wrong at Tacos and Burritos Rancho Grande on Ridge Road. The eatery is one of two Lansing locations (the other is on the north end of town, off Torrence Ave.) There are also three northwest Indiana locations and another in Chicago.

If you seldom branch out beyond Americanized ground beef tacos, this is the place to get introduced to a number of Mexican specialties—burritos, tostadas, sopes, tortas, tamales, carnitas, menudo, and more. If you insist on sticking to tacos, you’ll find over a dozen options, which include carne asada (steak), pescado (fish), pastor (seasoned pork), barbacoa (steamed beef) and homemade chorizo sausage. You can also try a traditional Mexican beverage of horacha (a sweet rice drink) or jamaica (a slightly tart hibiscus drink).

My most recent visit was my first time stopping in to try breakfast. My friend, who is a vegetarian, found a few meatless choices and tried the Huevos a la Mexicana (eggs with tomato, onion, and jalapeño.) I opted for a Buenos Dias Torta, a ham and cheese omelet with lettuce and tomato on soft, fresh bread. We both agreed that we’ll be back for breakfast. I was surprised at how vast the breakfast menu is and how reasonable the prices are, with 15 items ranging from $2.69 to $6.49.

On previous visits, I’ve ordered the spinach quesadillas (a lighter meat-free option that I really liked), tamales (very good and available daily) and barbacoa by the pound with corn tortillas, onions, and cilantro (which was enough for lunch for my five boys.) Rancho Grande’s guacamole is some of the best I’ve had. The barabacoa and carnitas by the pound, along with menudo, are available only on Saturday and Sunday.

The atmosphere is cozy and inviting, with some nice Mexican-inspired art on the wall, but one unique feature of this location is a focal point of the dining room. In 2008, when renovations were being done to the building before opening, a brick wall was revealed that had a painted advertisement on it for Fox Deluxe Beer. It is estimated to have been painted during the 1940s or 1950s and was covered when the building that houses the restaurant was built, which left it in good condition. The owner decided to preserve it rather than cover it up. As a local historian, I love this incorporation of the Village’s past into this current business.

Tacos and Burritos Rancho Grande is open daily for breakfast, lunch, and dinner, and open until midnight for those late night cravings. They offer family-pack meals (a 10-pack of tacos with rice, beans, salsa, and chips and guacamole is $32.99) and catering for larger groups with fajitas, taco bar, and more. Find more information and menus at tacosburritosrg.com. 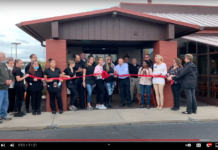