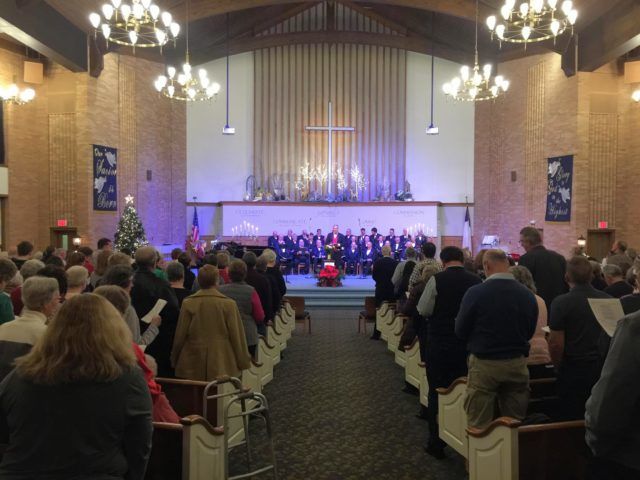 Formally titled “A Festival of Nine Lessons and Carols for Christmastide,” the concert featured the long-standing Chicago-based men’s chorale group singing a variety of Christmas favorites including “Silent Night,” “Carol of the Bells,” and “God Rest You Merry, Gentlemen.” The concert also included Betsy Archer singing a number of solo pieces, and the group invited the audience to join in singing multiple carols.

The Men Of A-Chord was founded in 1953 “by a group of Christian men who shared the joy of singing,” according to the group’s website. At least once a month, the men’s choir presents a concert, or is featured as part of a Sunday worship service—usually in south suburbs of Chicago. The group takes the summers off.

Approximately 30 men comprise the Men of A-Chord, many of whom have been members for years. The pianist for the evening, Beverly Hoitsma, has accompanied the group for 25 years and was recognized at the concert by the director Justin Rich.

During the concert, an offering was collected to help fund a scholarship to Trinity Christian College for male students from Illiana, Timothy Christian, Chicago Christian, or Covenant Christian High Schools who are interested in choral music.

To learn more about the history of the group, hear samples of albums available for purchase, and view the upcoming concert schedule, visit www.menofachord.org.

The Men Of A-Chord’s next performance is December 30 at 7:30pm at Cottage Grove Christian Reformed Church, 16556 Cottage Grove Ave, in South Holland, Illinois.

Will you join our community of faithful supporters? Your gift at any level helps ensure that we can report, publish, and deliver local news every day. And when you agree to give monthly, you provide a reliable source of income that helps us plan our news coverage.