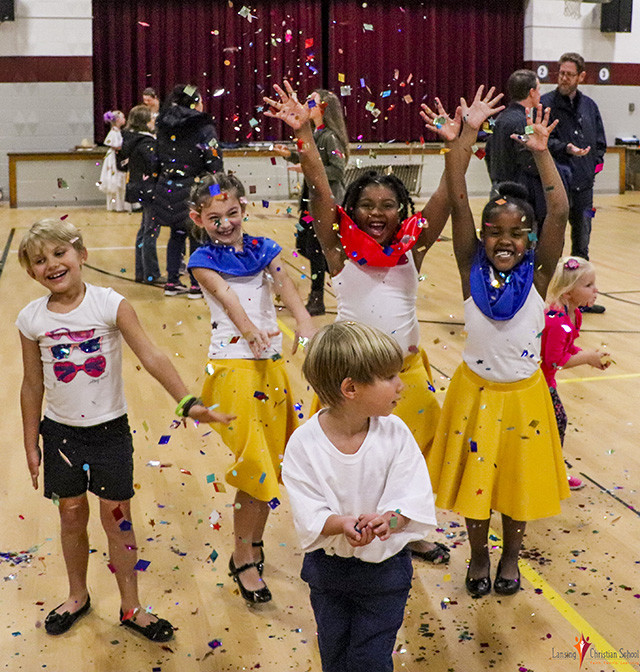 The classes have spent the past month studying the culture, food, traditions, geography, and dances of different Spanish-speaking countries. For last Monday’s presentation, they dressed in semi-authentic costumes and performed culturally representative dances.

The kindergarten class presented the dance, “El Torito Piňto” (Little Bull) from El Salvador, which was taught by Maestra Tijerina.

The first-grade class and Maestra Arsenault performed a dance from Perú, “Carnival of Arequipa.”

“Cubia Colombiana,” a dance from Colombia, was the second grade’s contribution to the evening, under the direction of Maestra Cruz.

The students and all who attended wrapped up the presentations by singing together “Quien Dices Que Soy” (Who You Say I Am), which corresponds with the school’s theme for the year, “Children of the King” (Hijos del Rey), based on John 1:12. All students at Lansing Christian School are learning to sing this song in Spanish during their all-school chapels.

After the presentations, everyone was able to sample food and see displays on each of the countries that were studied.

Lansing Christian’s Spanish Immersion program is designed for English-speaking households. Students in the program learn primarily in the Spanish language as they explore God’s creation through math, science, social studies, reading, and more.

Now in its fourth year, the only entry point for the program is in kindergarten with the goal of fluency by fifth grade.

Lansing Christian School is located at 3660 Randolph Street in Lansing. More information is available at lansingchristian.org.