VanDerGriend explains that Tuesday’s show is a “farm stand special,” featuring different tips from farmers across the country. He will be showing people how to freeze blueberries.

He got a call from Robin Sklar, a Segment Coordinator at the Rachael Ray show who said she had heard good things about VanDerGriend’s Farm Stand. She asked if he had any “produce tips.”

VanDerGriend wasn’t exactly sure what she meant by “produce tips,” but he offered this one: Most people peel bananas upside-down. That is, they peel from the stem rather than holding the stem, pinching the nub, and peeling down from there.

“She said, ‘Get outta here—I never heard that!’ And then I gave her some other tips like that,” said VanDerGriend. When Sklar asked what the farm stand was currently selling a lot of, VanDerGriend told her blueberries were in season. He explained that he and his wife freeze a lot of blueberries so they can enjoy them all year long—on ice cream, in cereal, and as a snack.

Sklar asked if he would be interested in sharing information about how to properly freeze blueberries, and VanDerGriend said, “Sure.”

He and his wife did the filming themselves. They received some basic instructions from an Associate Producer on the show, about lighting and making sure to hold the camera horizontally rather than vertically. Armed with only a smart phone, they filmed at the Red Barn, among the blueberries. VanDerGriend had written out some thoughts ahead of time and did his best to memorize the script, but he still felt like he didn’t do very well. “It took us, like, an hour to get just the three-minute clip they had asked for,” he laughed.

They Dropboxed their video to the Associate Producer, and she liked the content, but she told them the noise from the street was too loud. So they tried again in a few different locations and finally got some usable footage.

Throughout the process, there was never any guarantee that their video would be chosen for the show. It wasn’t until Thursday, September 13, that VanDerGriend received an email confirming that the September 18 show would include their clip. “They liked it and are going to air it,” he said on Facebook.

Because of the nondisclosure agreement he had to sign, he is allowed to share only limited information before the show airs. “Showing how to freeze blueberries” is all he can say about the content.

The show airs on Tuesday, September 18, at 10:00am, so VanDerGriend will be working in the Red Barn while his video is playing on TV. If there’s not too much going on, he might step inside the house to watch for a while.

He has already set his DVR, and he plans to have a watch party some night soon after the show airs.

For viewers in Illinois, showtimes and stations can be found here: 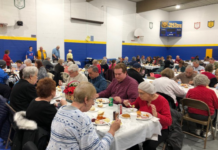