LANSING, Ill. (August 28, 2018) – Starting on Friday, June 15, Lan-Oak Park District offered a series of movies shown in Lansing parks. Paddington 2, Wonder Woman, Coco, Star Wars, Jumanji, and A Wrinkle in Time were all scheduled, along with music, games, and refreshments from 6:30pm until dusk.

In spite of weather issues that impacted two of the movie nights, Senior Superintendent Sharon Desjardins believes the series was a success. “In total, our attendance was easily in the hundreds,” said Desjardins, “and everyone had a great time at the events.” 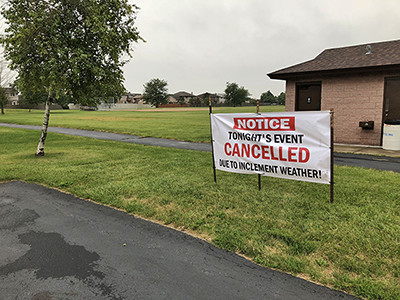 “With a spring event,” said Desjardins, “you expect weather issues. With the movies being summer events, we were surprised at how many were impacted by weather!” Desjardins is pleased that only one movie had to be cancelled.

The park district plans to purchase a slightly smaller screen for next year, which will allow the movies to be moved indoors in case of inclement weather, eliminating the need for make-up dates.

“We look forward to new movies and new fun next summer,” said Desjardins.