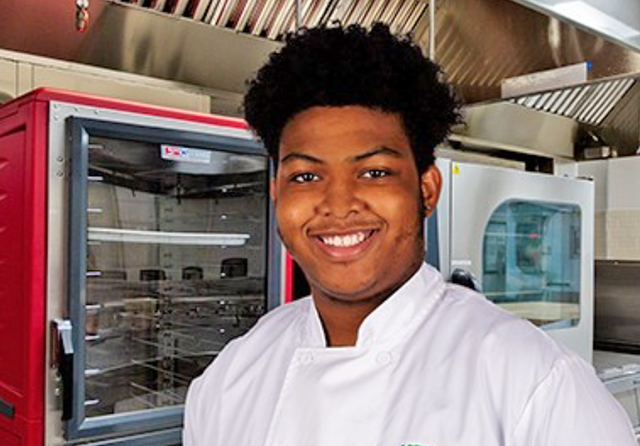 Elliott Moore Jr. one of six recipients awarded by US Foods Scholars program

ROSEMONT, Ill. (August 14, 2018) – US Foods announced the names of the company’s first US Foods Scholars scholarship recipients. Lansing’s Elliott Moore Jr. is one of the six recipients. Lynwood’s Gabrielle Siegfried is also included in the six.

Moore is a freshman majoring in culinary arts at Joliet Junior College in Joliet, Illinois. He has been cooking for more than seven years, having grown up watching his father in the kitchen. Moore had the opportunity to take culinary classes in high school, and as a US Foods Scholar, he hopes to earn his degree in culinary arts and eventually become a professional chef on a cruise ship. He says being a US Foods Scholar has opened up new doors for him and will allow him to pursue his dream. Moore’s father is an avid supporter of his career goals.

Siegfried is a first-year baking and pastry and hospitality management student at Kendall College’s School of Culinary Arts in Chicago. She learned the impact of making connections through food by watching cooking shows and baking with her grandmother. Already in middle school she began cooking regularly, and she soon became the resident baker for her art club. After graduation, Siegfried hopes to pursue a career working for a food company that offers a wide array of career opportunities.

The six scholarship recipients included three students from the greater Chicago area and three students from Arizona. Each was awarded $20,000 to support costs related to their continued culinary education, in addition to hands-on training opportunities with US Foods culinary professionals. The program awards financial support and professional development opportunities to students who plan to pursue an education in the culinary arts and enter the restaurant industry.

In addition to Moore and Siegfried, the four other recipients are:

About US Foods Scholars

US Foods Scholars was created in partnership with the Careers through Culinary Arts Program (C-CAP) to support students who have demonstrated outstanding potential and achievement in the culinary arts. The program was developed to help tackle the talent shortage facing the restaurant industry, which is forecasted to have 1.7 million new positions by 2025 (source: Bureau of Labor Statistics). US Foods Scholars officially launched in August 2017 in Chicago and expanded to Arizona in November 2017.

Led by chef, author, and restaurateur Marcus Samuelsson as board co-chair, Careers through Culinary Arts Program (C-CAP) is a national nonprofit that educates and guides high school students toward a bright future. Through its holistic approach to culinary training and career exploration, C-CAP prepares students for the workplace through chef mentoring, field trips, job shadows, work experience and job skills, college and career advising, and scholarships. C-CAP’s work impacts over 17,000 students each year. Countless C-CAP alumni work throughout the country and are guiding the future leaders of the culinary and hospitality industry.

US Foods is a leading foodservice distributor, partnering with approximately 250,000 restaurants and foodservice operators. With 25,000 employees and more than 60 locations, US Foods provides its customers with a broad and innovative food offering and a comprehensive suite of e-commerce, technology, and business solutions. US Foods is headquartered in Rosemont, Illinois, and generates approximately $24 billion in annual revenue.