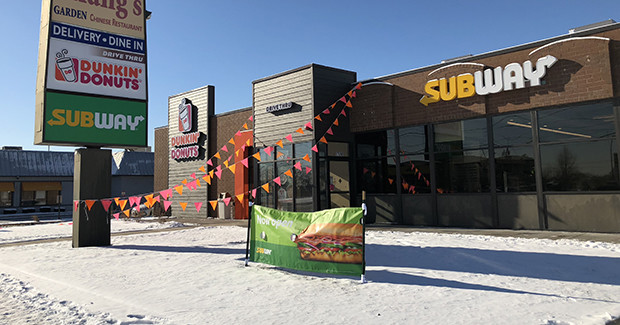 LANSING, Ill. (January 5, 2018) – The new Subway® Restaurant at 17050 Torrence Avenue has been open since December 21, and is preparing an official Grand Opening later this month.

The Grand Opening Event Weekend is scheduled for January 19, 20, and 21, beginning with a 12-foot sandwich-cutting ceremony at 10:00am on Friday, January 19. Lansing Village Board members and Chamber of Commerce members are invited. Buy-One-Get-One-Free deals will be available during the entire weekend for all customers. No coupons are necessary.

The newly updated Fresh Forward Subway® is owned and operated by Michael McSwiggan, who grew up in Lansing and is an alumnus of TF South from the class of 2000. McSwiggan has been a Subway® franchisee for over 10 years and owns two additional Subway® Restaurants—one in the Lansing Walmart and one in Orland Hills, Illinois.

For more information about the new 17050 Torrence Avenue Subway® or the Grand Opening that begins on January 19, contact Mike McSwiggan at 708-606-9811 or [email protected].