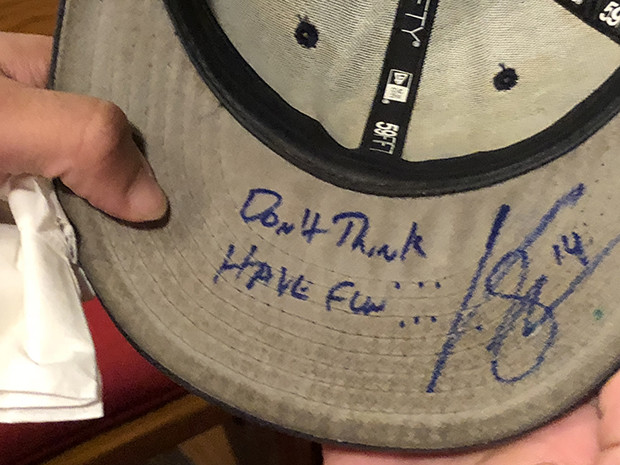 It’s the mantra that Major League Outfielder Curtis Granderson scrolls on the underside of the brim of his baseball caps. And he does the same whenever a fan asks him to sign a cap. It’s what he most wants youth players to take away from a meeting with him—that the game is meant to be fun, whether it’s being played on a little league field or in a major league ballpark.

On Saturday night, he spoke to a crowd in the sanctuary of the First United Methodist Church on Burnham Avenue, just steps away from the classrooms where he studied core subjects, and the field where he honed his baseball skills, and the gymnasium with bright red exterior lettering that he donated.

That’s just the tip of the iceberg of what he’s done to give back to the community where he grew from a young boy on a little league field to a high school baseball star before working his way into a remarkable playing career, while also becoming one of the most respected players in the game—respected by players, management, and fans alike.

According to Thornton Fractional South Principal Jacob Gourley, Granderson has made donations for other school improvements, provided shoes for most of the athletic teams, and recently donated $5,000 to the baseball and softball programs. And he provides an annual scholarship to a TF South senior who enrolls at UIC.

His visit to First United Methodist Church was completely voluntary (any freewill donations went to his Grand Kids Foundation), and he spent the following day hosting a free camp for kids in Lynwood, teaching them about the fundamentals of baseball.

His generosity isn’t confined to Lansing and Lynwood either. He’s made significant donations to his alma matter, UIC, and raises money for the Greater Chicago Food Depository and New York Food Bank through his Grand Giving initiative. His charitable reach has extended to the Detroit area were he spent several years early in his career with the Detroit Tigers—and where he played when his foundation was created—and far beyond.

Granderson has returned to the area often since his entry into Major League Baseball 14 years ago. His parents, both retired educators, still reside in Lynwood. He told the Saturday audience that he will always consider the Lynwood and Lansing area to be home, no matter where he goes to play baseball.

Introducing Curtis “CJ” Granderson was Jim Kijewski, who retired during Granderson’s junior year at TF South, but who knew him as a student. Serving as emcee was Kris Olson, a neighbor of the Granderson family who, along with Granderson’s father, did some parent volunteer basketball coaching at Heritage Middle School at the time when he was a student. Olson is a member of the church, and he contacted Granderson earlier in the year about visiting the congregation. Olson was able to coordinate the off-season speaking engagement while Granderson was in town to host his annual baseball camp and celebrate his father’s birthday.

Granderson talked briefly about his career, some of the lessons he’s learned, and the lessons he tries to instill in the young kids who look up to him. He then took questions from the audience, and then invited attendees to come up and meet him, take a picture with him, and get an autograph. And he stayed until every last guest was able to do so.

The first question came from Josuah Breitenreiter of Lansing, who asked him where he’d like like to play baseball next, now that he is a free agent. Granderson first warned the audience that should his phone ring during the Q & A session, it might be a call about his free agent status. He followed up with, “I want to go where I can win.” Granderson has gone to the World Series three times with three different teams, but has yet to be on a team that has been a World Series champion. “I’d really like to get a ring,” he said.

Inquiries rolled in from all ages, about his baseball career and personal life. When a baseball coach of 12-year-old players asked for advice, he talked about the need for the game to remain fun for the players and for them to have an opportunity to play a variety of sports at a young age rather than get locked into a rigorous schedule filled with travel ball. After all, basketball was Granderson’s first passion.

“If you were growing up around Chicago, everyone wanted to be like Mike. I did too,” he said. “At 12 years old, that’s where my head was.” He values his experiences of playing for the only sixth grade basketball team at Heritage Middle School to have an undefeated season of 16-0. Despite having more success as a baseball player in high school, he still had a drive to play professional basketball. It even played heavily into his college selection.

“I didn’t realize I was better baseball than basketball player until the scholarship offers were coming in,” said Granderson. “I went to UIC because they gave me an opportunity to also play basketball.”

On what would have been day one of basketball practice, he was injured at baseball practice. “I went to baseball practice first. I’m the runner at second base. I slide into second base, the shortstop falls on me, I get up and I break my thumb—and that ended my basketball dream,” he said. “And I said ‘Well, I’m here on baseball scholarship, let’s see what happens. And now I’m still playing.”

As one on a modest list of baseball players with a college degree, Granderson is quick to emphasize the importance of education. With the end of his playing career not too far into the future, he recognizes what an asset it is to have earned a college degree in Business Management and Marketing that could possibly steer him in a career on the business side of baseball in the future.

Having been drafted while he was a junior at UIC, finishing his degree meant a lot of on-the-road class work and enrolling in one of the school’s first online classes that involved using dial-up internet. Because some players are coming from different countries where they may not have even finished high school and many are being drafted into the minor and major leagues at a young age, it can make finishing school very difficult. Granderson noted that his degree greatly increases the number of options for him after retiring from his playing days. He’s scheduled to begin work later this month on his master’s degree and last year he earned a certificate in non-profit management after taking some coursework last year.

Granderson gave a few hints toward what path he may be headed—or not headed to—when he is no longer playing the game. Most likely he’ll still be involved in the sport of baseball in some way. “Working in baseball and staying in the game is definitely something I’m interested in, whether it’s with the youth and helping them with camps and clinics, or being on the mentor side of it,” he said.

So what has he ruled out? “I know I don’t want to coach. I have a great deal of respect for all my coaches, but it’s not something I want to do,” he said. ”People have talked about broadcasting. Possibly—but I know I don’t want to do it every day.” The deterrent: he’d eventually have to give negative feedback about players, something he doesn’t want to have to do. Another possible career that has been suggested to him is politics. “Absolutely not,” he said. “Especially not in Chicago.”

When asked about his earliest jobs when living in Lynwood, he said his first job was working for Lynwood Public Works, painting fire hydrants and curbs and picking up garbage for $5 an hour. He also worked a very brief stint at Bogart’s Steakhouse in Homewood that lasted four days—he had been making the mistake of putting in every chicken order as cajun chicken.

The questions spurred memories of his childhood in the 1980s and 1990s. “As a 10-, 12-, 14-year-old, some of the things I remember most are sleepovers, going to the pool, going to the movies, hanging out, playing video games and playing different sports—whether it was baseball, football, basketball, soccer, bowling, whatever it may be. I think the best advice I could give is, get involved in as many things as you can get involved in,” he said.

“When you step into the batter’s box you’re technically 0 for 0, meaning that at-bat is what you’re going to be. Not the previous at-bat. Not the next 10 at-bats. Focus on this, and control what you can control. What has already happened has happened. I have no way to control what happens in the future, but I can do something about this right now.”

“When I went to play for the Yankees, I learned that they are literally the most popular team in the world. I traveled around the world and I’d go to places and tell them ‘I’m here to promote baseball,’ and they’d say, ‘I don’t know about baseball, but aren’t the Yankees a team?'”

“I still consider myself a big kid to this day.”

“I saw my parents do things and didn’t realize they were giving back. I just thought that’s what you do. Having friends over for a meal, that’s a way of giving back. Taking things you don’t need anymore and passing them on to a neighbor’s kid. There are a lot of ways that you’re able to give back. That’s something that I learned at a very young age.”

“I enjoy feeding off the energy of the kids.”

“You don’t have to be in a situation I’m in to be able to help. You’ll be surprised at how the little things mean so much to other people.”

“If you know baseball, you know you’re going to fail a lot.”

“Minor League days are just like they show in the movies. Long bus rides, cities you’ve never heard of. …I was literally in the middle of nowhere. Our team had a lot of success. Not getting called up, for me it was a blessing in disguise–it kept me with this good group of guys, and I was able to develop and not have to play with a lot of pressure.”

“I never thought I’d be playing this long. God has given me an awesome opportunity.”