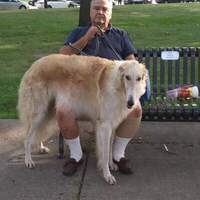 Dave was born on September 1, 1942, to Reed and Kathleen Sullivan in Hammond, Indiana. After graduating from Griffith High School in 1960, he married his high school sweetheart and went on to have a 51-year career at State Line Energy/Commonwealth Edison. After retirement, Dave partnered with his youngest son in the family’s local fishing business where he spent his last days and was fondly known as “the old man” around the lakes.

Dave was known throughout the years as the bike shop guy, the guy with all the Borzois, and later in life, as the guy with the axes. But the title he loved the most was being a father. He loved his children, loved his wife, and loved his grandchildren. David was a living example of the Heavenly Spirit, faithful and true in serving God to the end. Throughout his life, he was a peacekeeper, a tender spirit, and loving to all his children.

Dave is survived by his wife of 61 years of marriage, Patricia JoAnne Sullivan, and their children and spouses/partners: David Sullivan, Jr., Donna Alviani Sullivan (Bret), Scott Sullivan (Andrea), Edward Sullivan (Diana), Ryan Sullivan (Melissa), Mike Sullivan, Sr., (Sara), and Meegan Morgan (Matt). He is lovingly remembered by his 21 grandchildren and their spouses and partners and his nine great-grandchildren. He is also survived by his brother, Christopher Sullivan. David and Patricia opened their home to 22 foster children through the years, giving love to children who needed a safe haven. David joins in heaven for eternity his eldest child, Kathleen Marie Chubb, and his parents Reed Smith Sullivan and Kathleen Marie Sullivan.

Please do not stand on ceremony, attire is casual as Dave would want you to come as you are. He loved you for you, he did not want anything formal.

The family requests that all flowers and notes be sent to Smits Funeral Home. If inclined, in lieu of flowers, donations can be made in David’s name to the American Diabetes Association.