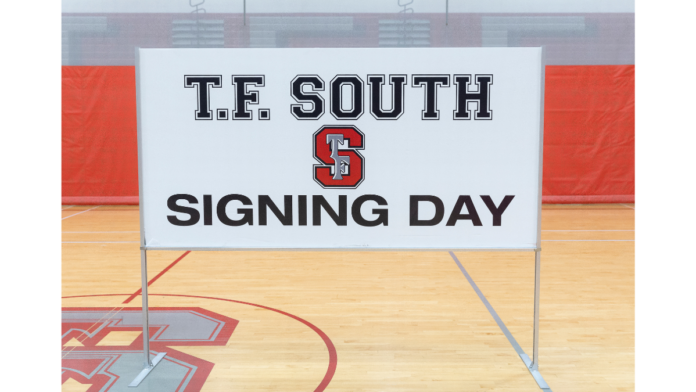 Students announce their decisions, and recipients of inaugural scholarship announced at Signing Day

Students decided to either continue their education, go straight to work with a trade or career, or serving the country in a branch of the military. Throughout the event, there were various raffles for prizes including gift cards to a few local restaurants, a chromebook, and a 43-inch television.

This year’s graduating class earned a combined $7.4 million in scholarship money as of the day of the event, with more expected to come. This year, TF South was one of the participating schools in the country that attended classes taught by Harvard University and Howard University professors. 30 students finished top in the country, including some of the graduating seniors.

Though the event has been streamed the past two years, O’Rourke was excited to get back together in person this year.

“We continued through the pandemic, but nothing is like hearing a crowd of students, teachers, and family cheering,” said O’Rourke.

Guidance Counselor Nicole Burk and Social Studies Teacher Jamie Sawyer presented the scholarship awards. The memorial scholarship was established by the parents of Potacki. During her 14 years at TFS, she worked in various departments including physical education, math, guidance, English, and special education. She was the coach for the Girls Swim team and Associate Head Coach for the Girls Softball team.

Nicholas England will be going to the United States Marine Corp. England chose this path because of its fitness, discipline, and structure benefits.

Zabdiel Silva Tapia will be attending Johns Hopkins University, where he will be majoring in neuroscience on a pre-med track.

“Johns Hopkins was my medical school, and I’ve been given this humongous blessing to be able to attend John Hopkins University and hopefully get a shot at their medical school program,” he said.

Korey Ziemkowski will attend South Suburban College for two years for a degree in Business administration, followed by Elmhurst University for a nonprofit program.

“I chose South Suburban so I can continue to run my micro-pantries out of Lansing,” said Ziemkowski.

Audrey Ortega will attend University of Illinois at Chicago to major in Accounting.

“I think I’ll miss the teachers here because they are all nice, caring, and push you towards education,” said Ortega.

All graduating seniors will be receiving a “freshmen essentials” basket. The baskets will be filled with items that students will need their first year of college, such as cleaning supplies and school supplies.

Dozens gather for student-led prayer at the TF South flagpole