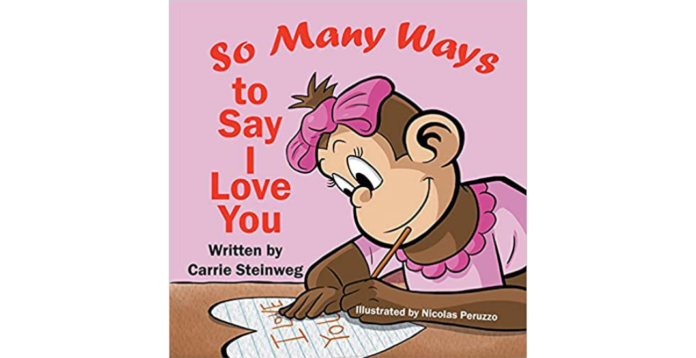 LANSING, Ill. (October 26, 2021) – Lansing writer Carrie Steinweg has released a new book for children called So Many Ways to Say I Love You, her fourth title in the genre.

The book was released in the spring, and has a Valentine’s Day theme, following Lacey the monkey who finds new ways to show how much she loves her family.

Steinweg said her inspiration for the book comes from a few sources, one being the television show Mister Rogers’ Neighborhood.

“I wanted to make a short, easy book in the spirit of things I learned from Mr. Rogers,” she said. “Everyone wants to feel loved and sometimes saying those words or expressing love can be difficult for some. I just wanted to express to young readers that there are so many ways for them to show love and to see that love comes in many forms.”

The inspiration for her monkey character came from a series of videos Steinweg’s kids showed her on social media site TikTok. The videos feature a monkey named George opening gifts sent to him by fans. After using a dog for her latest book, Waffle Loves Falafel, the lovable monkey videos led Steinweg to choose a monkey as her next animal protagonist.

“I sent a copy of the book to George … and was excited when a video was posted of George opening the book,” Steinweg said.

Steinweg misses visiting local school classes to read her books, a tradition she enjoyed before the pandemic. She said, “Now that school is back to in-person learning, I’m hoping to start scheduling some appearances again during this school year,” adding that local teachers can get in touch with her at [email protected].

Although no new book is queued up as Steinweg’s next release, she has a number of writing goals, including writing a cookbook, a travel guide, and helping someone write an autobiography.

“I love encouraging kids to read, helping to instill a love of books and reading and seeing how excited they get about meeting an author,” she said.

Steinweg’s books are available on amazon.com and bn.com. Copies are also available for purchase at Quik Scripts on Ridge Road in Lansing. She has Facebook pages for each of her books, including So Many Ways to Say I Love You.