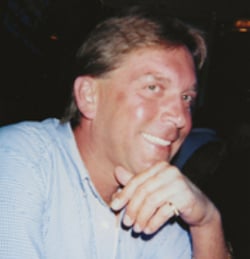 Walter Reilly age 57, of Cedar Lake, IN, formerly of Lansing, IL, passed away early Wednesday morning, on October 20, 2021. He is survived by his beloved wife Jeanette, his three loving children: Connor Reilly, Bobby Bogs, Crystal Carlson; and his son-in-law Lars Carlson. He is also survived by his two grandchildren: Heidi and Axel Carlson; as well as his mother Theresa Reilly. Walter is proceeded in death by his father, Walter Reilly Sr., and his sister Mary.

Walter was born on May 30, 1964, in Chicago, IL, to Walter Sr. and Theresa Reilly. He was the youngest of two children, with his sister Mary being older. Walt grew up in Lansing where he attended St. Ann Catholic School and graduated from T.F. South, class of 1982. After graduating, Walt proudly served in the U.S. Navy. After being honorably discharged due to a medical issue, he went to work on the tugboats in Charlevoix, MI. After some time doing that, he returned to Lansing and began working at Ozinga Concrete, where he worked for the past 35 years as well as working for himself as the sole owner of American Maintenance. In 2000, he met his loving wife, Jeanette. They both say it was love at first sight. Walt and Jen were married in 2003 and loved being together. They spent every day of the past 21 years together. Whether it be sealcoating driveways and parking lots, aerating or roto-tilling, or just working around his house, he loved to stay busy. Walt and Jen loved gardening together. They began growing pumpkins a few years ago and were just starting a peony farm together last year. Walt made friends everywhere he went. Anyone who met him instantly liked him, and he loved to talk to people. Walt, more than anything, loved spending time with his family. He would do anything for his wife, children, and grandchildren. He will be greatly missed.