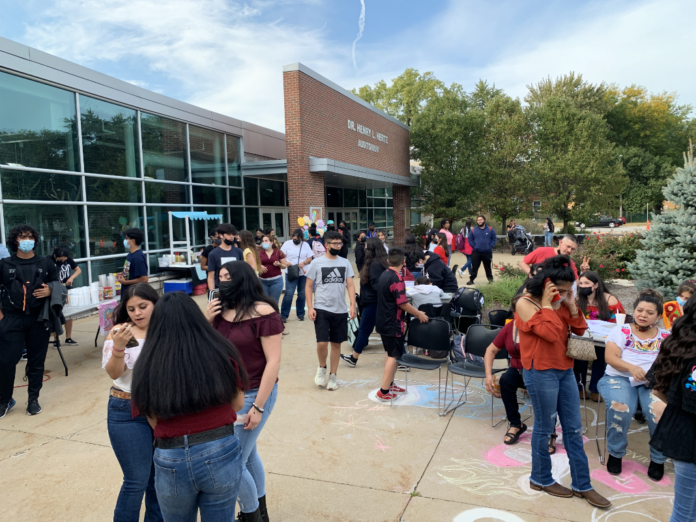 The two-hour event in front of TF South’s main entrance was planned by both the TF South Latin Dance Crew and the Dreamers Club, who raised money for the event.

This is the second iteration of the celebration, which first took place during Hispanic Heritage month in 2019. Last year’s event was cancelled due to COVID.

“We want to celebrate culture and have people who are part of the Latino community in Lansing feel seen and celebrated,” said Hannah Berridge, Spanish teacher at TFS and faculty sponsor of the Latin Dance Crew, which helped organize the event.

Participants had the choice of three Lansing restaurants to enjoy Mexican cuisine: Taqueria La Soga (19267 Burnham Avene), La Michoacana Compi (19283 Burnham Avenue), and Kdulche Cafe — which is soon to be open for business at 3521 Ridge Road.

Alta Alerta provided the music for the day, a three-man band including one current and one former TFS student.

As the crowd gathered to listen to the music and watch the dance crew, others colored in drawings at tables, while still others played Lotería — a Mexican game similar to Bingo.

“I feel like the kids want to get out there and be a bigger part of their community,” said Alejandra Garcia-Gonzalez, TFS Spanish teacher and faculty sponsor of the Dreamers Club. “Our students are that community-to-school connection. Without our students, there’s no way the school can get more involved in the community, so that’s what is really happening here.”