As part of The Lansing Journal’s ongoing efforts to increase sports coverage at TF South, we have asked TFS coaches to provide us with information about their matches/games. The Lansing Journal will be posting these scores and summaries multiple times per week in a “TFS Sports round-up.”

The lone goal in Thursday’s match was scored by Lexani Gaines. Jesus Puerta had 7 saves in the shutout. TFU remains perfect in conference play, notching its third win. Their total season record is 5-2.

Friday night’s game at Tinley Park showcased a variety of scorers for TFS. Jacob Urdiales threw to Willie Roberts for a touchdown, Urdiales ran a touchdown into the end zone himself, and Ernest Temple had two rushing touchdowns. Another touchdown was provided by the defense when Joe Lindsey ran an interception for a touchdown. Brandon Woods added a two-point conversion in the game and kicker Ivan Villalobos kicked three extra points.

TFS had 187 total rushing yards, with 148 of them going to Temple. Urdiales tallied 71 passing yards on 6/10 completions. TFS gathered 211 total yards after penalties in Saturday’s victory.

Become one of the 100 people we need to contribute to TFS sports coverage. Use this form:


Subscribe to receive regular TFS sports updates in your inbox — just input your email in the form below. (It’s free.) 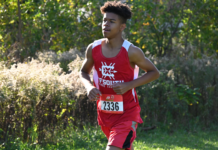 TF South football falters in final game ahead of playoffs