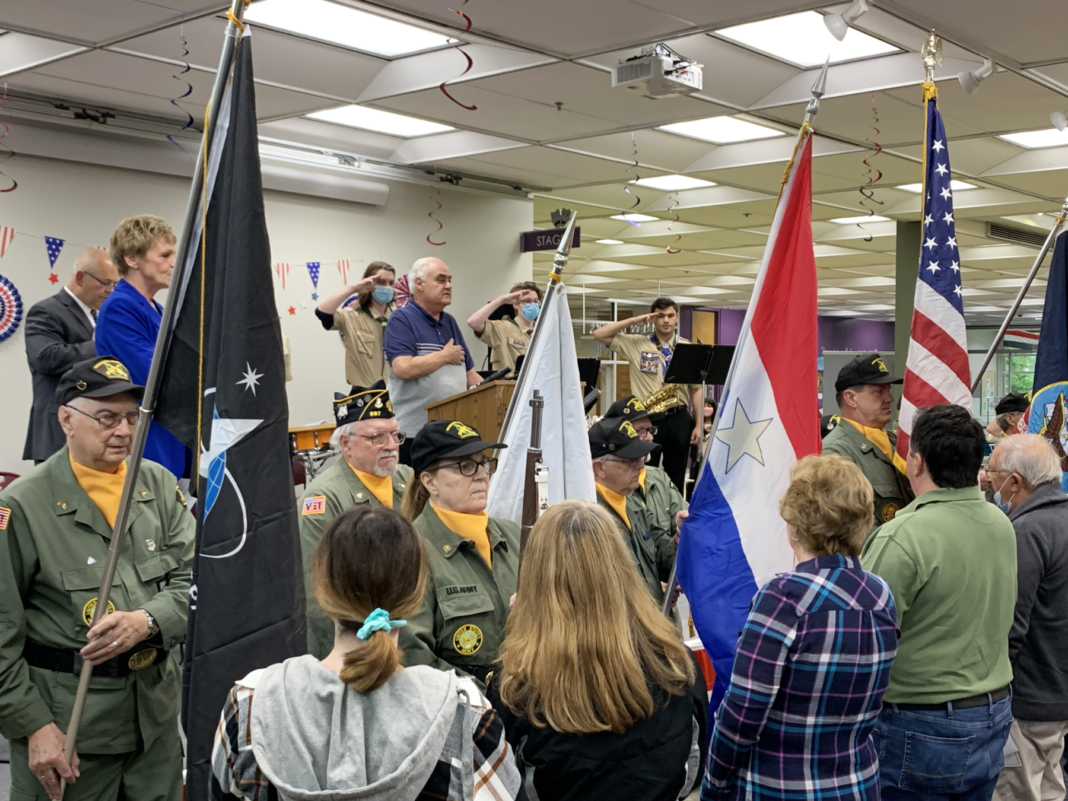 Lansing Library hosts dozens of veterans amid crowd of nearly 200

LANSING, Ill. (May 28, 2021) – The Lansing Public Library was full of veterans and their families and friends on Thursday as the Village of Lansing and the Lansing Library partnered to honor Lansing servicepeople as part of the “Lansing Hometown Heroes Celebration”

The ceremony was attended by nearly 200 people and was tied in with the Village’s Hometown Heroes banner program. Thursday was a celebration of all of the faces and names seen on banners throughout the Village, and some of those faces were seen in the audience during the celebration. The Village invited everyone honored as part of the Hometown Heroes Banner program to attend the celebration, along with their families and friends.

The Lansing Veterans Memorial Ceremonial Honor Guard presented the colors to start Thursday’s ceremony, including flags from each branch of the U.S. military.

Lansing veteran and former village trustee Tony DeLaurentis led the crowd in the pledge of allegiance before the Troop 276 Ceremonial Ensemble played the national anthem.

St. John Lutheran Church pastor Dr. John Richy then led a prayer which was followed by a rendition of taps played by Neil Venhuizen.

Later in the program, Troop 276 played an armed forces medley, and veterans from each branch of the military were asked to stand when their branch’s song was played.

A program for Lansing’s own

Village Communications Director Ken Reynolds spoke about the Hometown Heroes program, and the history behind it. He attributed the program’s genesis to the mind of Mayor Patty Eidam.

“The Hometown Hero program on display throughout our village, and here at the library after tonight’s program, is the culmination of some 18.5 months of work by the Village, and, even more importantly, family and friends of the 100 men and women for whom the program honors,” he said.

Lansing family members and friends nominated veterans in their lives and submitted those recommendations to the Village. The Hometown Heroes banners were hung on light poles throughout the Village in early May.

Lansing Library Director Debbie Albrecht thanked the Library Board, staff, and the village administration for helping make the event possible and ended her comments with emotion, saying, “Thank you to all our hometown heroes. Whether you have a banner or not. Land of free because of the brave. It rings really true to me. Thank you for your service.”

Mayor Patty Eidam spoke next, saying, “We are celebrating Lansing civic pride and patriotism by displaying the banners, and we are also celebrating families.”

Eidam also asked everyone present who was featured on a banner to stand, a request that was met with applause as dozens stood to be honored. “Thank you for your service, ladies and gentlemen, and thank you for being here for us tonight,” she said.

The Mayor — an Army veteran herself — ended her comments by asking the crowd, “As we approach the Memorial Day weekend, please take time to remember those that have given the ultimate sacrifice for our country so that we can be free.”

Fred Schrum is the current commander of American Legion Post 697 in Lansing, and served nearly 30 years in the military, dividing his time between the Coast Guard and the Navy. Schrum grew up in Lansing and appreciated that his hometown would put on a ceremony like Thursday’s.

“It’s very nice. We’ve never got all the vets together in town, ever,” Schrum said.

Duane Fritz agreed, and as part of the fourth generation in his family to call Lansing home, being recognized by the Village of Lansing was a special honor. Fritz’s son nominated the Army veteran and Fritz was taken completely by surprise by the recognition.

“I ran into a high school friend tonight,” he said, “We split up after high school, he went into the Marines, I went to the Army. He sat in front of me tonight, and I’d never seen him since — it’s been that long. It’s just great. It’s just great there’s been this much response.”

Mini displays of the banners hanging around town are now on display at the Lansing Library. Many of the replicas have bios next to them, written by the veteran or a friend or family member.

The Lansing Historical Society, which is located in the basement of the library, also has military memorabilia on display through July.