LANSING, Ill. (May 8, 2021) – Laurie Crosby is white; Valerie McDaniels is Black. Other than that, the two have discovered that they have a lot in common.

“She has her white culture, I have my Black culture, but we like all the same things!” McDaniels said.

The two were paired up as part of Lansing’s Common Ground program, which partners people of different races together to learn about each other. The program began in August 2020, and partners were to meet monthly and discuss a set of provided questions to help them explore differences, correct misunderstandings, and discover similarities.

Nine months into the program, which has happened entirely during the COVID pandemic, some groups have met all nine times; some missed a meeting or two; some never connected with their partners. Some groups have been meeting mostly on Zoom, others in houses, still others have been frequenting local restaurants.

“Thank you for sticking with it — I know it has not been easy,” Melanie Jongsma, program organizer, said in the third-quarter large-group meeting, which was held at Living Word Church in Lansing last week.

The main focus of this latest meeting was a discussion of possibilities and changes for the future of the race relations program.

Crosby and McDaniels have become friends through their partnership, and they would like to see their own friends and family members find a similar connection. They encouraged the larger group to take a grassroots approach to growth. They noted that the people who participated in Common Ground this year are those who are willing to get involved, who want to learn, and who tend to take on leadership roles in the community. They suggested that everyone reach out to people who are a little “less open-minded,” and show these potential participants how successful, useful, and enjoyable the program can be.

Of course, success in a program like Common Ground is difficult to define. Crosby and McDaniels have formed a genuine friendship, but that’s not necessarily the main goal of Common Ground. Other partners simply learned more about each other, or took the opportunity to discuss difficult topics, or figured out how to disagree respectfully — and each one of these could be considered a program success.

“The intended outcome is hard to qualify — that you have people who are more comfortable approaching someone who is different,” said Common Ground participant and Village Trustee Leo Valencia. Jongsma echoed the sentiment: “I have dreams and hopes for how it [Common Ground] will work — but how do you measure it?”

Some of the participants spoke in support of finding some kind of data set that can help them measure the effect of the program on its members and the greater Lansing community. One participant, Yolanda Rogers, volunteered to do some further research into that topic.

Common Grounders also mentioned a number of options to give the program more visibility: hosting quarterly meetings in public parks, getting Common Ground t-shirts, and participating in Lansing’s Good Neighbor Day Parade. The overwhelming sentiment from the group was that they would like to continue to be part of the program moving forward.

Jongsma, who has organized this program before, through her church, has only ever done a “class by class” format — at the end of the year, the program participants “graduate” and the next group starts. Both Jongsma and the current Lansing Common Grounders are looking to do things a little differently this time. In fact, there was little support for a graduation ceremony of any kind — members opted instead to call their upcoming end-of-year large-group gathering an “anniversary.” The Lansing Journal will continue to provide updated information as more details for the future of the program are finalized.

Most of the proposed changes to future versions of Common Ground would allow for more flexibility for participants — the option for people to join throughout the program, and not just once a year, or a shortened version that would allow them to bring new people in more often.

Dorelle Scheeringa and Shauna Small-Craib started in the program a couple months late, but said that it didn’t seem to affect their partnership. They connected right away, and their first meeting lasted six hours.

“You just have to be open, and jump in with both feet,” Small-Craib said.

Some Common Ground members suggested partnering with local institutions, like churches and schools, to grow the program among groups that are already established and reach out to a more diverse group of people. This year, most of the partnerships have been between Black and white members, with a few Latinos participating.

“I want to make a point that this is not just Black with white — we have Hispanic people, people of different genders, sexuality, and ages, we have all groups in Lansing,” said Ken Reynolds, Common Ground member and Director of Communications for the Village.

Jongsma, who is also the publisher of The Lansing Journal, is looking into making the Journal a more official sponsor of Common Ground. Sign-up for the program could be on the Journal website, including a form or questionnaire that gathers enough information to help partner up the participants with someone from a different background.

The magic of uncertainty

Of course, there’s no way to guarantee a perfect partnership. Every individual is unique, with not only different skin colors, genders, and ages, but also differing views on everything from religion and politics to pizza toppings and baseball teams. Many different topics come up naturally while partners are answering provided questions.

“This is not an exact science — that’s part of the magic, that you find out you have more in common than you thought,” said Common Grounder Michelle Smith in last week’s meeting.

Crosby and McDaniels are confident their friendship will continue regardless of the future of the program. They appreciate the accountability and questions that come with regular meetings, but they’re already making plans outside the Common Ground parameters. 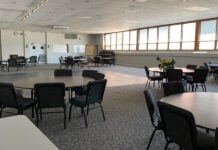 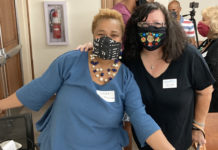 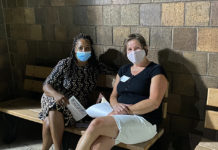