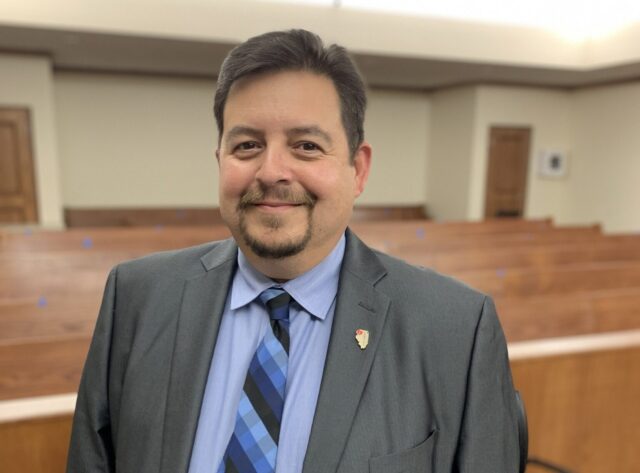 By Josh Bootsma, with information provided by the Village of Lansing

The task of appointing Manno’s replacement fell to Mayor Patty Eidam, who said during Tuesday’s meeting, “I made no secret that filling this vacancy on our Board of Trustees is not easy. Now that my choice has been made, I feel it is an excellent choice for Lansing.”

Eidam outlined Valencia’s community involvement, including his two decades of membership in the Calumet City Lions Club, his leadership of L.A.C.E. (Lansing Association for Community Events), and his time spent as a little league coach and boy scout leader.

The 19-year Lansing resident was interviewed in 2017 by Village administration to be the chairman of the Human Relations Commission (HRC), a role in which he helped Village officials interview potential commissioners. The HRC launched in the fall of 2018 under Valencia’s chairmanship with the goals of promoting unity, diversity, understanding, pride, and community involvement in Lansing. Valencia resigned from his chairman position shortly after his Village Trustee appointment. He and his wife Maria are also participants in the Common Ground program, which launched August 20th and is the largest initiative to emerge from the HRC since the commission’s inception.

Eidam said, “I am confident that Mr. Valencia will represent the residents of Lansing to the very best of his ability. In fact, it is a huge benefit that he will be able to communicate with our Spanish-speaking residents when many of us cannot.”

Valencia, who spent three of his teenage years living in Mexico, also hopes that his bilingual skills will aid him in his new role. “I’m hoping that I will also get some interest in some of the Spanish community to be a part of Lansing. It’s very hard if you don’t have a voice there or you don’t have someone you can feel comfortable communicating with, maybe even picking up the phone and giving a call, where they can’t do that with somebody else,” he said.

Valencia said he expressed to the Mayor some interest in a trustee position in 2018. “I felt it was something I wanted to do, something I wanted to learn, something I aspired to. I’ve always liked to give back to the community through different avenues. Being part of L.A.C.E. and then being a part of the HRC almost seemed like the right steps to try be a trustee,” he said. Valencia has joined the Village Voice Party, the Lansing political party to which Mayor Eidam belongs, as do Trustees Abbasy, Fish, Hardy, and Zeldenrust.

After his appointment was unanimously approved, Valencia swore an oath of office before the Village Board and onlookers, which included some of his family members. Valencia currently works as an operations manager at Staffing Inc., a staffing company with multiple office in the Chicago area. He has been married to his wife Maria since 1991 and has five children and three grandchildren.