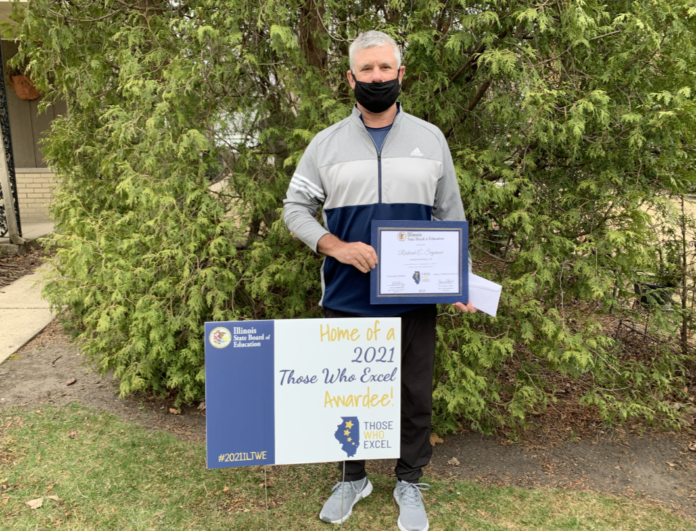 LANSING, Ill. (March 25, 2021) – As part of a handful of “Those Who Excel” awards District 158 presented to staff and faculty this year, Rick Seymour received a community volunteer award on Tuesday for his work helping establish and run the annual Roundball Classic fifth grade basketball tournament.

The tournament pitted fifth graders from any Lansing schools that wished to participate against each other in a friendly yet competitive tournament for 11 years. Managed by Seymour and co-organizer Sally Reynolds, the Roundball Classic also gathered food and monetary donations for the Lansing Community Food Pantry. Seymour estimated $60,000 was collected over the tournament’s 11-year run.

Seymour and Reynolds announced in early 2020 that they would no longer be running the tournament, inviting anyone else to pick up the Roundball and run with it. COVID-19 prevented the tournament from happening this year, and it is unclear if it will continue in coming years under new leadership.

On Tuesday, March 23, District 158 Superintendent Dr. Nathan Schilling, Oak Glen Elementary Principal Mike Earnshaw, and Reynolds—who is a PE teacher at Oak Glen—met outside Seymour’s Lansing home and presented him with a yard sign and certificate in recognition of his service.

Schilling said last year was the District’s first year nominating its staff members for the “Those Who Excel” award from the Illinois State Board of Education.

“There was one [award] for community volunteer,” Schilling said. “And so we pretty quickly realized the person we had to nominate for the first time we were ever going to do this was going to be Mr. Rick Seymour. And we also knew that in doing this, we had to involve Mrs. Sally Reynolds, who together played such an integral role in creating a very meaningful opportunity for our students, and also something that serves our community, that being the Roundball Classic.”

Both Schilling and Reynolds wrote a letter of recommendation for Seymour.

Awarding other District 158 staff and faculty

The other District 158 faculty and staff and earned “Those Who Excel” awards are listed below: