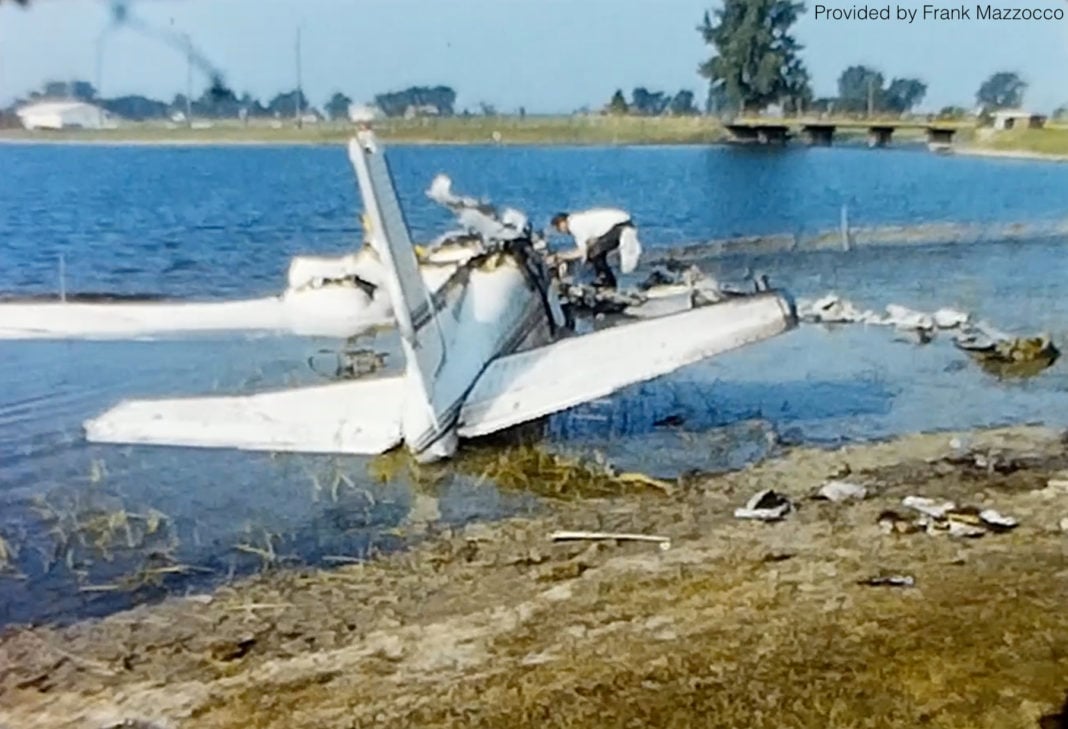 LANSING, Ill. (February 12, 2021) – Tony Lema never got the chance to become a golfing legend. If his promising life and career had not been cut short in Lansing at age 32, his name might have been mentioned among those of Jack Nicklaus, Arnold Palmer, and Tiger Woods.

He was not just a rising star in the sport, Lema was at the top of his game. The professional golfer competed with, and sometimes beat, the best of the best—among them Palmer and Nicklaus—in the PGA tours of the 1950s and 60s.

In 1964, Lema won five PGA tournaments, more than any other golfer that year. He was the champion of the British Open. His popularity following that season led to appearances on the Lawrence Welk Show and the Ed Sullivan Show, and a cameo on the TV series Hazel.

In a tragic twist of fate, Lema’s life ended on the green of the 7th hole of the Lansing Sportsman’s Club.

Following the 1966 PGA Championship held in Akron, Ohio, Lema and his wife chartered a plane to transport them to the Lansing Municipal Airport, which was then called Lansing Hammond Airport. From there he was to travel to Lincolnshire Country Club in Crete to play in the Little Buck Open exhibition tournament. But Lema never made it to the Lincolnshire Country Club. In fact he never made it to the airport. His plane went down, reportedly after running out of gas, just shy of its destination on July 24, 1966. It crashed onto the golf course at the Lansing Sportsman’s Club—recently known as the Lansing Country Club.

The twin-engine plane that was flying Lema and his wife was piloted by Doris Mullen, who flew alongside her co-pilot, Dr. George Bard. All four died in the crash about a mile from where they were set to land. The crash left the Lema’s 4-year-old son David an orphan.

A memorial marker was unveiled a decade ago at the Lansing Country Club dedicating the 7th hole in memory of Tony Lema.

Lansing attorney Dale Anderson was a member of the Lansing Sportsman’s Club at the time, having joined in 1964. He said that the club was in its heyday in that decade, and he remembers the accident vaguely.

“He was really at the prime of his game and one of the absolute top golfers at that particular time,” said Anderson. “It was really a tragedy.”

Anderson recalled that Lema’s nickname was “Champagne Tony.” He said he wasn’t sure why, but thought it might be because he liked to raise a glass of champagne after a win.

Frank Jemsek, owner of Cog Hill Golf and Country Club in Palos Park said that Lema actually acquired the name after he bought champagne for everyone after winning his first tournament. From then on he was known for buying bubbly for the press following his wins.

“He was quite a good player. I know he was simply good for the game of golf and certainly had more than average popularity among the players,” said Jemsek, whose father bought the Cog Hill courses in 1951 and built the club up to include the championship course it has today. “I was quite impressed by his golf swing and how well he could play.”

Tom Coster, retired Assistant Chief of the Lansing Fire Department was not yet a firefighter at the time of the crash, but he listened to many stories over the years from co-workers who responded to the call.

“I joined the department not too long after that and was always fascinated by it,” said Coster. He remembered learning about the crash when he was in Wisconsin with his family, watching the six o’clock news. “My dad wasn’t a golfer but enjoyed watching him,” said Coster. “We were all in shock.”

Frank Mazzocco is a hockey broadcaster and photographer in Minnesota, but he grew up in Lansing. He was 15 years old—had just finished his freshman year at TF South—when the fatal crash happened. He lived three blocks from the Lansing Sportsman’s Club. Although he couldn’t remember exactly how he learned of the crash, he said he likely found out on the Sunday evening news or from the following morning’s Chicago Tribune. “To have not heard the plane or the crash makes me think I was elsewhere when it happened,” said Mazzocco.

The morning after the crash Mazzocco went to the crash site with his Bolex H-8 Rex 8mm camera and shot footage of the wreckage and the removal of the plane. He estimates he spent about four hours there, based on the sun positioning in the scenes. Last summer, he posted this 3-1/2-minute edited video of the footage he took that day:

“This was my first ‘spot news’ coverage, and at that age I didn’t know what spot news was. I guess I learned some things by watching local news,” Mazzocco explained. “The footage is quite shaky, and the posted version was edited by the adult me to remove some of the whip-pans and unsteady shots.”

Mazzocco said that the scene was not restricted, so he was able to easily gain access to the area as a teen. “As I looked back on it, what amazed me was the access that I had. I just walked right onto the golf course,” he said. “Today, I’m sure security would have stopped me at Wentworth Avenue. And no officials bothered me. If they asked me what I was doing, I’m sure I said something like, ‘Shooting home movies.’ And they let me be.”

He said he may have heard of Lema before the crash, but knew nothing about him. “I do remember that as I filmed I knew I needed to get a close-up of the cockpit and that I was very leery about approaching it. Then to see the charred mess, I had a pit in my stomach. To see the personal belongings being removed brought home the horror of the event. Again, I sensed it was part of the story that needed to be told,” Mazzocco said.

“I’d rather be remembered as a decent sort of person”

In a televised interview with popular sports journalist Howard Cosell just weeks before Lema’s death, Lema and Cosell shared a bottle of champagne. Cosell asked, “When you do give up golf, when you give up the pro tour at least, how would you like people to remember you? How would you like to them to characterize you?”

Lema’s reply: “Well, I haven’t really thought of that, Howard. I’d just like to play good golf, successful golf, as long as I can, and if I’m remembered, that’s fine.”

Cosell’s follow-up question was, “Do you want to be remembered as a good golfer?”

“I’d rather be remembered as a decent sort of person,” answered Lema.

The conversation concluded with Lema popping open a bottle, and the two making a toast as Lema said, “There’s nothing like ending a nice day or a good game of golf with a little taste of the bubbly.”

The full video is included below:

Lema’s 87th birthday would have been on February 25 of this year.