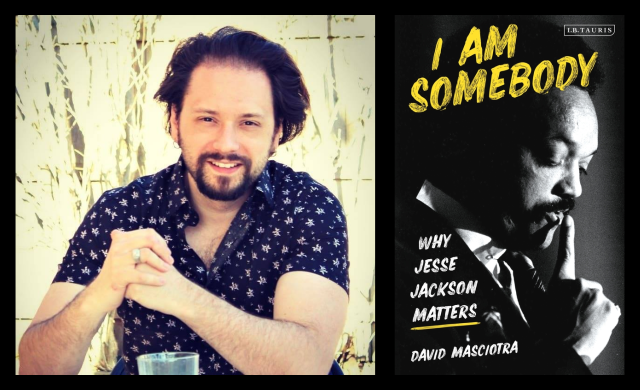 LANSING, Ill. (October 12, 2020) – Students in the 2003 T.F. South graduating class might recognize the epigraph of David Masciotra’s upcoming book I Am Somebody: Why Jesse Jackson Matters as something they once read in a T.F. South history class. They’d be right.

Born and raised in Lansing, Masciotra has used the skills and talents he started to develop in his hometown to propel him to success as a professional writer, having written five books and numerous articles for national publications.

Focus on politics and music

About seven years after Masciotra wrote his last article for the Rebel Rouser school newspaper at T.F. South, he published his first book, Working on a Dream: The Progressive Political Vision of Bruce Springsteen, a study of Bruce Springsteen’s music and its political and ideological progressiveness. Masciotra has since published Mellencamp: American Troubadour—a biography of John Mellencamp, and Metallica’s Metallica—a short book detailing Metallica’s Metallica album, commonly known as the the “The Black Album.” In 2017, Masciotra wrote Barack Obama: Invisible Man, an examination of President Barack Obama and his legacy. Masciotra also regularly writes for Salon, a news and opinion website, and No Depression, a music journal.

Masciotra’s next book, I Am Somebody: Why Jesse Jackson Matters, will be released on October 15 and examines the political legacy of civil rights activist and politician Jesse Jackson.

“The topics I write about most frequently are politics and music, and occasionally they will coalesce,” said Masciotra, who graduated from the University of St. Francis with a Bachelor’s Degree in Political Science and obtained his Master’s Degree in English Studies and Communication from Valparaiso University.

In addition to his writing, Masciotra also teaches writing and literature courses at St. Francis University and Indiana University Northwest.

Masciotra was born in Lansing and grew up as an only child. His parents moved a couple of times while he grew up, but always stayed in Lansing. The writer-to-be attended Trinity Lutheran School from kindergarten through eighth grade and T.F. South in high school. He played park district basketball at the Eisenhower Community Center and enjoyed visits with his family—and later his girlfriend-now-wife to Popolano’s Restaurant in Lansing, which closed in 2014.

“[Lansing] was a wonderful place to grow up. I really look at my childhood in Lansing as almost idyllic,” Masciotra said.

He and his wife, who now live in northwest Indiana, come to Lansing frequently to visit friends, go to restaurants, and attend community events.

Masciotra said the teachers he had at both Trinity Lutheran and T.F. South played a role in his professional success. He has even maintained a good relationship with former T.F. South Spanish teacher Roger Sullivan. “I’ve remained really close with Roger,” Masciotra said. “We’ve become great friends.”

Masciotra also said Jacob Gourley had an impact on him. Gourley, who is now the principal at T.F. South, taught history while Masciotra was there. The epigraph in Masciotra’s new book comes from A People’s History of the United States by Howard Zinn, a book that Masciotra read portions of as part of Gourley’s class.

During his graduate schooling at Valparaiso University in 2008 through 2010, Masciotra worked as a substitute teacher at T.F. South.

His Lansing upbringing also influenced the subjects he cared about, as Masciotra felt a strong identification with John Mellencamp’s material because Mellencamp, having grown up in a small Indiana town, expressed many of the feelings Masciotra felt about Lansing. Masciotra’s Mellencamp: American Troubadour is a biography of Mellencamp.

“[Mellencamp] was able to depict the wonderful and beautiful elements of small town life, and then some of the more frustrating elements. It resonated with me because too often in our political debates and cultural conversations we have a tendency to focus on [big cities], but I’m someone who really enjoys the small town pace and lifestyle, and much of that is a result of my enjoyable childhood,” Masciotra said.

It wasn’t just Mellencamp that had an impact on Masciotra growing up. He also heard plenty of news about Jesse Jackson and his family. The civil rights activist and politician has largely operated out of Chicago since the late 1960’s, and his son, Jesse Jackson Jr., was the U.S. Congressman that represented the 2nd IL district—which Lansing is a part of—from 1995 through 2012.

“I’ve admired Jesse Jackson for many years, since I was a child, since I grew up in Lansing and in my home, there was consistent endorsement of Jackson’s work. His work on racial justice really resonated with my mother and my grandfather,” Masciotra said.

As Masciotra became more interested in politics growing up, he also became more interested in Jesse Jackson, until, in 2014 working for the Daily Beast, he interviewed Jackson. The occasion for the interview was the 30th anniversary of Jackson’s first presidential campaign. Jackson ran for president as a Democrat in both 1984 and 1988, but did not receive his party’s nomination in either year.

“One of the blessings of my life is that I went to interview Jackson as a journalist to write one article but we developed a rapport that led to many more interviews, and my accompanying him on his travels on several occasions, and the opportunity to more consistently view his work up close,” Masciotra said, who went with Jackson to South Carolina; Selma, Alabama; and other parts of the country.

Although he did not originally intend to write a book about Jackson, Masciotra said that his extensive observation of the man along with Jackson’s widespread influence made for the “perfect material for a book-length exploration.”

“Getting to know Jackson quite well gave afforded me the ability to present a more intimate look at not only his work but the man behind the work,” said Masciotra. “No matter how much you research someone or something, there’s things you can never learn about a person until or unless you have that personal contact.”

Masciotra has been following Jackson on-and-off for the last six years, and his new book I Am Somebody: Why Jesse Jackson Matters outlines the life and policies of Jackson, a man Masciotra calls “the most effective and consequential living civil rights leader.” He says Jackson, who served as an aide to Dr. Martin Luther King Jr., was somewhat ahead of his time when it came to progressive politics, but was foundational to much of the modern day Democratic Party’s ideologies.

“You cannot understand—whether you’re an admirer or support of his or not—contemporary politics and the contemporary Democratic Party without understanding Jesse Jackson,” Masciotra said.

I Am Somebody: Why Jesse Jackson Matters will be released on Oct. 15. The book is available on the publisher’s website as well as bookshop.org, a site that supports local bookstores. It is also available from other online retailers.

People interested in following Masciotra and his work can do so on his website. His self-named “political musings” can be found on Salon, where he is a regular contributor.