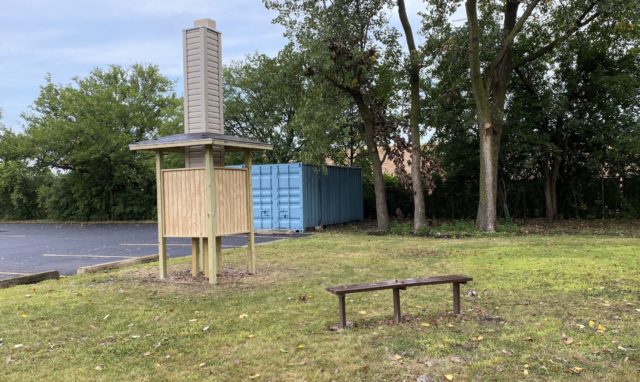 LANSING, Ill. (September 3, 2020) – The Mildred Burt Nature Center has seen many improvements in recent years, the most recent of which is a chimney-like tower designed to house a special type of bird called the Chimney Swift. Chimney Swifts have long made Lansing their home during the summer months, and have gained a following of amateur ornithologists in the community. The new tower is hoped to provide a reliable home for the migratory birds for years to come.

Chimney Swifts are a migratory bird species that make their home in Peru. However, in Peru’s winter, the birds fly north to the Midwest in mid-April where they make nests, lay eggs, and raise their young to be strong enough to fly south back to Peru come October.

The birds are unique in that their feet are designed to perch not on horizontal surfaces, but on vertical ones. The birds would originally roost in hollowed-out trees but as man-made chimneys became more prevalent and remained unused during Midwest summers, the birds began calling these their home, and were given their name for doing so. The species’s population has been in decline in recent years

For decades, Coolidge Elementary School played home to Lansing’s largest colony of Chimney Swifts. The birds’ evening routine of flying around and then entering the school’s chimney sometimes drew a crowd of spectators on pleasant evenings. The group called themselves “The Swifties.”

When demolition work was needed at the school in the summer of 2018, Lansing resident Julie Blackwood started an online petition for the District 158 School Board to find an alternative way for work to be continued on Coolidge without the birds’ home being destroyed. The petition received nearly 1,300 signatures. Ultimately, the District 158  Board chose to create a temporary tower to house the birds so the work on Coolidge could continue.

In the summer of 2019 and this summer, the birds have found their homes in other places throughout the area, including at St. Anne’s School and Cornerstone Church.

The Lansing Garden Club is responsible for the recent improvements at the Mildred Burt Nature Center. The club was started in early 2019 by Lansing resident Diane Lund. Lund said shortly after she started the Garden Club she came before the Lan-Oak Park Board and pitched a three-year plan of improvements to the Mildred Burt Nature Center. The Board responded positively and asked if she could complete the project even quicker.

Last year, the Lansing Garden Club planted hundreds of pollinator plants in the Mildred Burt Nature Center. They planted hundreds more this year in an effort to continue drawing bees, beetles, butterflies, and some types of birds to the area.

A chimney for swifts

Lund became aware of the Chimney Swift issues in 2018, and added a Chimney Swift tower to her ideas for transforming the Mildred Burt Nature Center. Though she wanted to have the tower up by mid-April to house the birds this summer, COVID derailed those plans. Now, however, the 15-foot tower is up and ready to host Chimney Swifts. Lund said that although the tower won’t be a summer home for swifts this year, some might use the tower as a temporary shelter as they begin their journey south to Peru. Lund said that someone on Facebook had indicated they had already seen a few swifts already using the tower.

Created by Lund’s husband Rich, the tower is built with special siding on the inside, which has grooves in it. The tower was assembled in such a way to allow the grooves to run horizontally and provide the perfect spot for the Chimney Swifts’s special feet to perch. The tower is insulated to help keep the temperature bearable for the birds in the hot summer months. Lund and her husband Rich used a book titled Chimney Swift Towers to guide their construction of the tower.

Around the base of the tower is a kiosk that will be fitted with information about Chimney Swifts. The kiosk was also built by Rich Lund and has shingles on its top. Lund said that roofs and roof-like structures tend to attract the birds, and she hopes the Eisenhower Center and nearby Buford Walker Senior Housing will help in this regard. The trees above the current tower were trimmed to allow for the birds to circle around the tower before diving into it.

When asked how the swifts would find the new tower next year, Lund said, “I am told, ‘build it, and they will come.'”