CHICAGO, Ill. (August 26, 2020) – On August 26 Governor JB Pritzker announced Illinois was chosen to host two of the five new National Quantum Information Science Research Centers led by Argonne National Laboratory and Fermi National Accelerator Laboratory in affiliation with the University of Chicago. Each project is projected to received $115 million in federal funding to support breakthroughs in quantum information and science. As part of the state’s historic Rebuild Illinois capital program, Gov. Pritzker made sure the state invested $200 million in the Quantum Exchange to put Illinois at the forefront of creating jobs for the next century. The Quantum Exchange is hub for researchers, both academic and industrial, oriented around the goal of advancing efforts in the science and engineering of quantum information.

“This is one of the most exciting developments for the economic vitality and prestige of our state. I could not be more delighted that Illinois will be home to not one, but two of the five quantum research centers in the U.S.—opening the newest chapter in the storied history of scientific and technological innovation in the state of Illinois,” said Governor J.B. Pritzker. “I’m also proud to see one of our world class public universities, the University of Illinois, recognized for their groundbreaking research on artificial intelligence that will revolutionize industry. Our outstanding ecosystem of world-class academic institutions, national labs, Fortune 500 companies and tech startups has changed the world before, and it is poised to do so again. With our state’s investment in science and technology alongside the university and the Department of Energy, we lay the groundwork for scientific achievements that will shape Illinois, the nation—and the globe—for decades to come.” 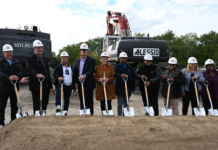