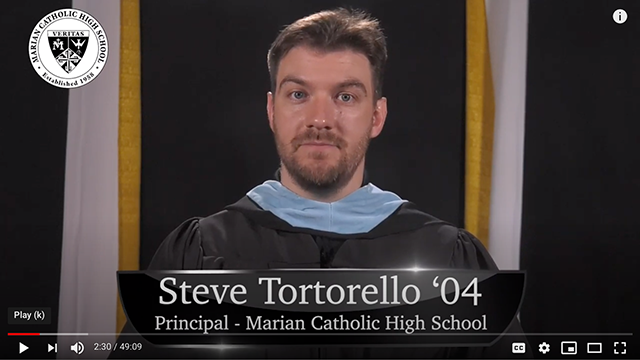 Honors Night features the recognition of all student scholarships, academic awards, athletic and fine arts awards, and other distinctions for the class.

The Baccalaureate Mass represents a final opportunity for the Marian Catholic community to gather spiritually with seniors and members of their immediate families in a holy celebration that is the culmination of the seniors’ journey as a class.

This year, due to the extenuating circumstance posed by the pandemic, Marian Catholic hosted an online Virtual Recognition Ceremony Monday evening. The school hopes to hold an in-person Baccalaureate Mass and formal presentation of diplomas sometime in the future.

While the past few months have obviously been anything but normal for Marian Catholic’s 213 seniors, they have continued their pursuit of excellence. Marian Catholic’s approach to e-learning has been unlike any other school, employing one-to-one iPads; a structured, full day of school; and tools like Schoology, Zoom, Google Hangouts, and Flipgrid to keep students engaged with faculty and each other until their last day.

The 49-minute Virtual Recognition Ceremony was broadcast on YouTube earlier today and by 10:00pm had already been viewed more than 1,500 times:

The program includes student addresses by Dominican Veritas Award Winners Cruz Arteaga (Dyer, IN) and Payton Ramsey (Matteson, IL). The Veritas Award is Marian Catholic’s highest non-academic award. It goes to the young woman and young man who have been recognized by the Marian Catholic staff as outstanding examples of the Dominican Pillars in daily life at Marian (Study, Prayer, Community, and Preaching).