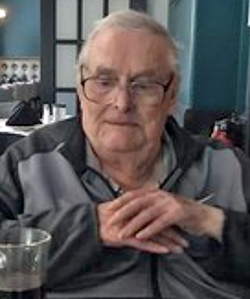 Eugene J. Brinkman passed away early Sunday morning at the age of 95.

Eugene was a life-long member of Trinity Lutheran Church where he was baptized and confirmed. He attended Trinity Lutheran School and Thornton Fractional High School. Eugene enlisted as a paratrooper in the United States Army on March 22, 1943. He trained in Arkansas and North Carolina, and then he was sent overseas to Italy where he was wounded on May 1, 1944. After his recovery, he participated in the invasion of southern France. On August 22, 1944, he was seriously wounded and was hospitalized for five months in Naples, Italy. Eugene was awarded the purple heart decoration with three stars. Later, he was promoted to corporal and remained in Europe until 1946. He worked in the army motor pool driving trucks and dispatching vehicles.

Upon his return to Lansing, Illinois, Eugene worked for the Simmons Mattress Company in Munster, Indiana. He enjoyed his breakfasts at Golden Crown and liked to hang out at the VFW. He remained in the Lansing area and lived in his original homestead up until five years ago.

Eugene will have a private burial at Oak Glen Cemetery on Saturday, November 2, 2019.