LANSING, IL (August 30, 2019) — Under new ownership, a long-time Lansing business is taking steps toward a more medical approach to footwear.

Derek Schwartz took over Sandler’s Shoes on Ridge Road in February 2019. Second-generation owner Beverly Sandler is expected to officially transfer ownership to Schwartz later this month. Sandler’s father, Abraham Sandler, started his business in Hammond in 1962, and the store moved to downtown Lansing more than 20 years ago.

Sandler’s has always taken pride in providing their customers with the best-fitting, most comfortable shoes available. Schwartz would like to continue that legacy.

The store has also added a machine to take 3D imaging to help any of its customers figure out which inserts to get—or allow them to make a 3D-printed custom insert.

Dr. Mary Peterson, a chiropractor, is also partnering with Sandler Shoes. She is available by appointment on Tuesdays.

“It’s an amazing service,” Schwartz said. “We have no qualms about reaching out to doctors, and we’ll work with their treatments to help their patients. Foot health is directly associated with your independence as an individual.”

One step at a time

Schwartz is a licensed pedorthist who already owns Nobile Shoes, which has two locations in Florida. He is planning to bring his own experience to his newest location. However, he will be splitting time between Lansing and Florida, so Phill Sullivan, who was previously the manager at one of the Florida stores, has been the acting manager at Sandler’s Shoes since February. Sullivan is currently obtaining his pedorthic license.

More is yet to come for the Lansing shoe shop. Schwartz has plans for a remodel, to update the decor and displays. He’d like to bring in more brands to join the ones he has already added. And he plans to open a shoe repair lab in the store.

Ben Knepper, a custom shoe and orthotic manufacturer, is slated to join the staff full time. His start date is tentatively scheduled for October. 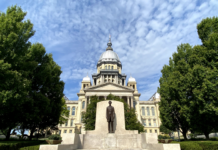 Face coverings required in all Illinois state buildings, regardless of vaccination status