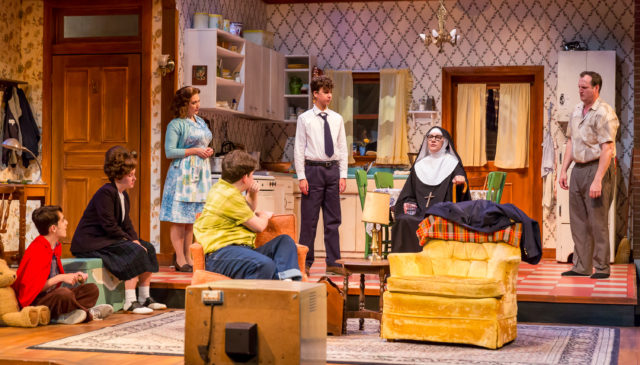 LANSING, Ill. (July 26, 2019) – On a corner property in Buffalo, New York lives a boy who’s starting to doubt his faith. Despite being raised by Catholic parents alongside four siblings, young Rudy Pazinski can’t quite get past this question: what if I don’t want to be Catholic? So begins Over the Tavern, Theatre at the Center’s foray into religion, family, and the challenging, goofy, and sometimes life-changing power of relationships.

The Pazinski family, like most families, is a complicated one. The youngest brother Georgie (Julian Solis) has a mental disability, Annie (Isabelle Roberts) takes troubling steps to be noticed by the boys at school, and the oldest brother Eddie (Seth Steinberg) is content (though ashamed) to receive Playboy magazines as payment for his after-school job. But the most interesting complication is the one that drives the plot: in a life saturated with Catholicism, Rudy (Logan Baffico) seems to be straying from the Catholic faith.

The play, set in 1959, opens as Rudy receives verbal and physical swats from Sister Clarissa (Janet Ulrich Brooks), his strict and aging teacher at St. Casimir’s Parochial School. A battle that gains nuance throughout the play, Sister Clarissa is intent on teaching Rudy the basics of the Catholic faith while Rudy seems intent on the opposite—preferring to impersonate Ed Sullivan and ask off-the-wall questions about Jesus and Catholicism. As the play continues and the Pazinski family economy begins to take shape—backboned by the resilient mother, Ellen (Cory Goodrich)—it quickly becomes clear that there’s a cloud hanging over this family in the form of someone who’s notably absent: Dad.

Chet Pazinski (Eric Slater) works only a story below his home in a tavern that shares his name, but is somehow still distant from his family. And when he is physically present, he cares very little about truly listening to his children and wife. Tensions are heightened as Chet’s problems with his own family are added to Rudy’s problems with the church. The delicate facade of peace that’s been achieved in the household is quickly shattered as Rudy’s unwillingness to learn from Sister Clarissa comes to the fore and forces real, difficult conversations to occur.

Over the Tavern is part of a series of semi-autobiographical productions written by Tom Dudzick and premiered in 1994. Much of Dudzick’s work explores religious themes that he encountered growing up as a child in New York. Dudzick said of Over the Tavern, “Essentially the play is a tribute to anyone who was ever a child and asked, ‘Why?’”

The play asks this question effectively, and takes the audience on a laughter-filled but thoughtful journey into the mind of a boy who had the courage to be critical in a setting where doing so was thought to risk his salvation. The complexity of the story requires complex performances from the actors, who dive into the religious and familial nuances with a mighty effort. Baffico’s performance as Rudy was most often funny and charming, while Slater’s performance as the troubled father helped the audience feel the fear and hate that his character inspired in his children. Solis made an excellent Georgie, producing movements and noises respectfully and accurately reminiscent of someone with a mental disability.

The most impressive performance, however, was that of Janet Ulrich Brooks, who made Sister Clarissa remarkably believable. Regular patrons of Theatre at the Center will remember Brooks from last summer’s one-woman show Ann Landers: The Lady with All the Answers. Given the way Over the Tavern is written, it would be tempting for an actress to turn the strict Catholic instructor into a caricature of a spindly, cantankerous, and ruler-wielding bully. Brooks, however, took a more measured approach, giving the character depth and a human quality. As Sister Clarissa subtly changes over the course of the play, Rudy isn’t sparring with a crotchety old lady, but having a meaningful conversation with a true and thoughtful person, expertly achieved by Brooks.

Complementing the complex plot and characters is a scenic design that is equally so. Placed on the second floor of a corner lot, the set’s detail perfectly captures the function of a late 50’s home, while simultaneously nodding to the artistic form of the era. The level of detail in the home is astounding, from the posters in the bedrooms to the spices in the kitchen to the massive “Chet’s” sign that descends from the exterior of the second floor to the imaginary floor below. Of particular delight are the tops of the “windows” of the home, which are flown in from above and subtly frame the action. The shadows cast on these window-toppers give the impression that there are trees nearby, a wonderful detail that could just as easily have been forgotten. Another period-appropriate detail is the TV and radio noises that help smooth the transitions from scene to scene and give helpful historical context. Angela Weber Miller (Scenic), Shelley Strasser (Lighting), Michael J. Patrick (Sound), and Emily Hartig (Props) did well in designing these aspects of the play’s setting.

Theatre at the Center’s Over the Tavern leaves its audience asking serious questions about faith and family and achieves what the playwright intended, to challenge the notion that the question “Why?” is wrong. Sister Clarissa tells Rudy early in the play, “Stop thinking. Your instructions are to memorize.” But by the end of the story, both Sister Clarissa and Rudy’s father Chet are willing to talk with Rudy and engage his questions rather than swatting them away. Not all of his qualms and questions are answered, but by the end of the play new doors have been opened between Rudy, Sister Clarissa and his Dad, doors that allow for open, honest, and genuine conversation.

Ultimately the play, with its complex characters and story, is in many ways like life: By the end we’re left with more questions than when we started. And perhaps we’re better for it.

The show runs through August 11. Performances are: