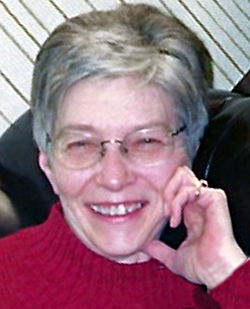 Friends are invited to visit with Joan’s family on Friday, May 31, 2019, from 2:00 – 7:00 PM at the Schroeder-Lauer Funeral Home, 3227 Ridge Rd., Lansing, IL. Funeral services will be held on Saturday, June 1, at 10:00 AM at the funeral home, with Pastor Tom Carton officiating. Joan will be laid to rest in Oak Ridge Cemetery in Lansing. In lieu of flowers, memorial donations may be made in Joan’s name to Pacific Garden Mission, 1458 S. Canal St., Chicago, IL 60607.

Joan was an active member of Lansing Bible Church and a supporter of the Word of Life in the Philippines. From 1982 – December 2004, she was employed as a Deputy Clerk in the US District Court for the Northern District in Indiana. She was promoted to Courtroom Deputy for Honorable Andrew P. Rodovich at the Federal Courthouse in Hammond, IN. After high school, she worked for the Simmons Co in Munster prior to becoming a Deputy. She volunteered at Oak Forest Hospital and participated in Thornton Township trips and luncheons.

Joan, a Servant of the Lord, was a beloved sister, aunt, and great aunt, and she will be missed by her family and many friends.