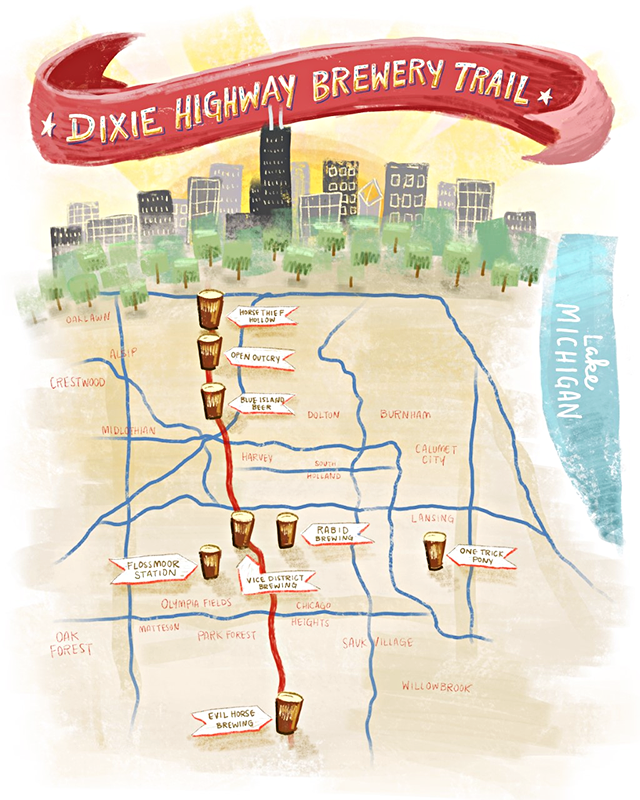 CRETE, Ill. (April 18 , 2019) – Eight southside breweries have launched Chicagoland’s newest brewery trail. The trail follows the historic Dixie Highway from Beverly on the north to Crete on the south.

Guests can pick up passports at each participating brewery or download them from the trail’s website at DixieHighwayBreweryTrail.com. Once all eight breweries have been visited, guests can turn their passport in for a prize and a chance to win one of four brewery swag baskets.

In 1914, Carl G. Fisher (who also helped plan the Lincoln Highway—one of the earliest transcontinental highways across the United States) came up with the idea to create the Dixie Highway. The highway was part of the National Auto Trail system and was a network of paved roads, rather than one single highway. The western route of the Dixie Highway ran from Chicago to Miami, allowing a way for northern automobile tourists to drive to Miami for vacation. While originally supervised by The Dixie Highway Association, each town along the route was responsible for building and maintaining its section of the highway. In the late 1920s, the federal government took it over as part of the U.S. Route system. Over the decades, the Dixie Highway has played a significant role in each of the towns along its path, and the highway has a storied history.

Surplus equipment, training, and more offered at The Bunker on Ridge Road